The Beauty of the North East!

Hope you're all having a peachy weekend. I'm bundled up and ready to tell you all about Stoirm Òg's adventures in the North East!

I first thought of bringing 'The Idiot at the Wall' to this part of Scotland in November 2012, when I was spending some time in Portsoy. My mother grew up there, in this picturesque little village on the Banffshire Coast. In November it takes a bit of a battering from the wind, so I was very glad to stay warm by visiting folk who remembered my Mum's dad being the local doctor, and playing my fiddle too :-) The people were so welcoming, and interested in this play I was thinking of touring, so I thought: why not? The play deals very much with a community which lives and dies by the sea, and I was sure the folk of Portsoy would relate. Then I learned about North East Arts Touring which helps and promotes rural touring in the North East, and the rest rolled along from there. #happyidiots

As we left Edinburgh, however - part of me wondered: "Will they like it up there?" Apart from Greenock, and our home crowd at the Traverse, we had only really performed the show in the West Highlands - where more Gaelic is spoken, of course, and they kent a lot of the songs! Well, I needn't have worried: we had a full house in New Deer, and the audience were brilliant. Playing ceilidh tunes at the top of the show, I looked out, saw rows and rows of beaming faces, and thought: yep, they're into it! Also, in New Deer Village Hall they served wine at the interval - a great move - perked them up for Act II it did :-) Also, my Mum came with 3 friends! She loves zooming around Scotland!

So after a lovely show, we packed up the van once more...the Butterchurn being Kenny's job - obviously... 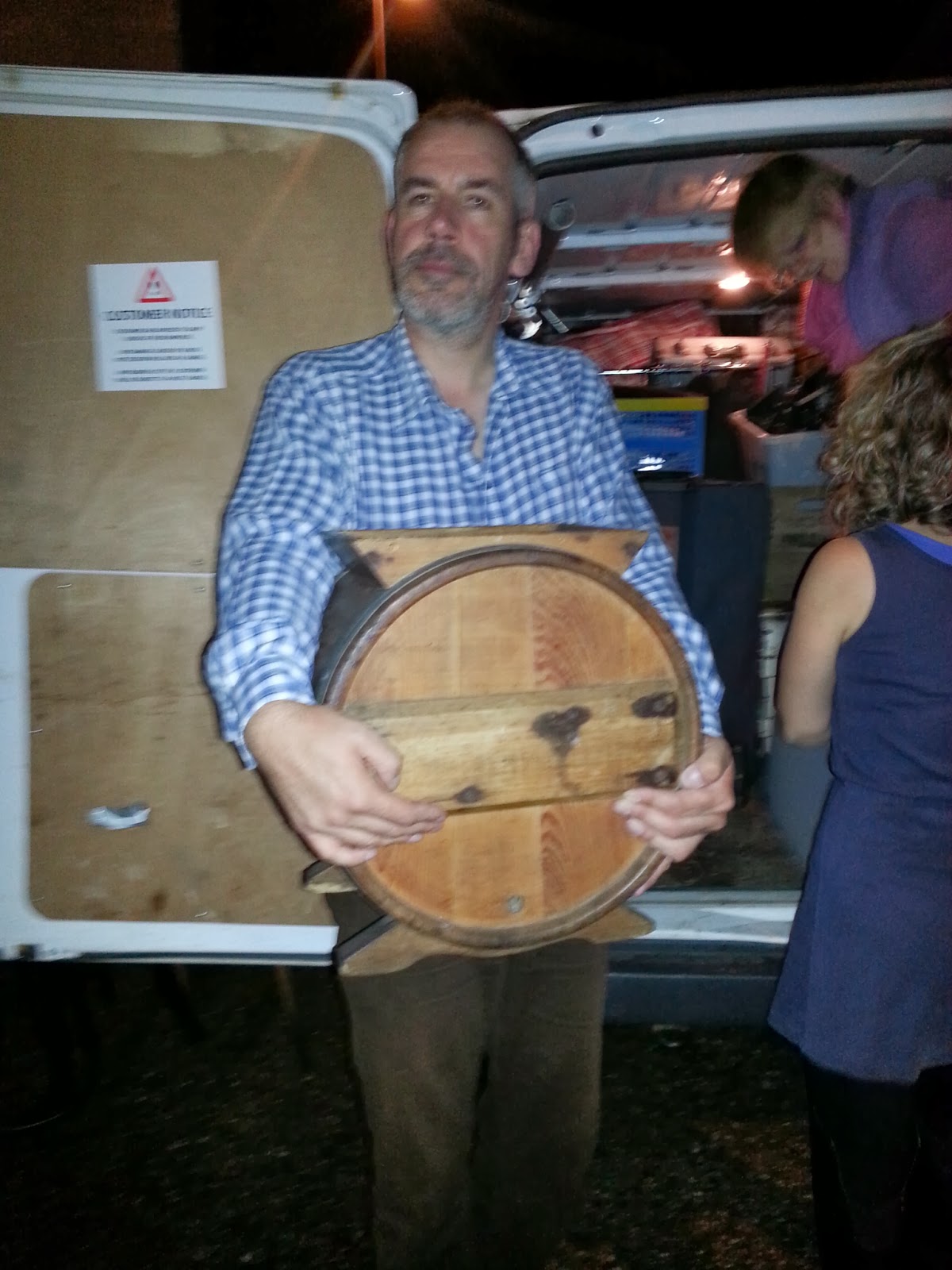 On this day, we made the short drive over to Kemnay. On the way, we stopped in lovely Inverurie, where some of us shopped and some of us went for tea and some of us went to see the ducks! 'Twas a nice wee breather :-) Arriving at Kemnay Village Hall, we were so impressed to see the place so well maintained - it was obviously used often, and cared for with a lotta love. 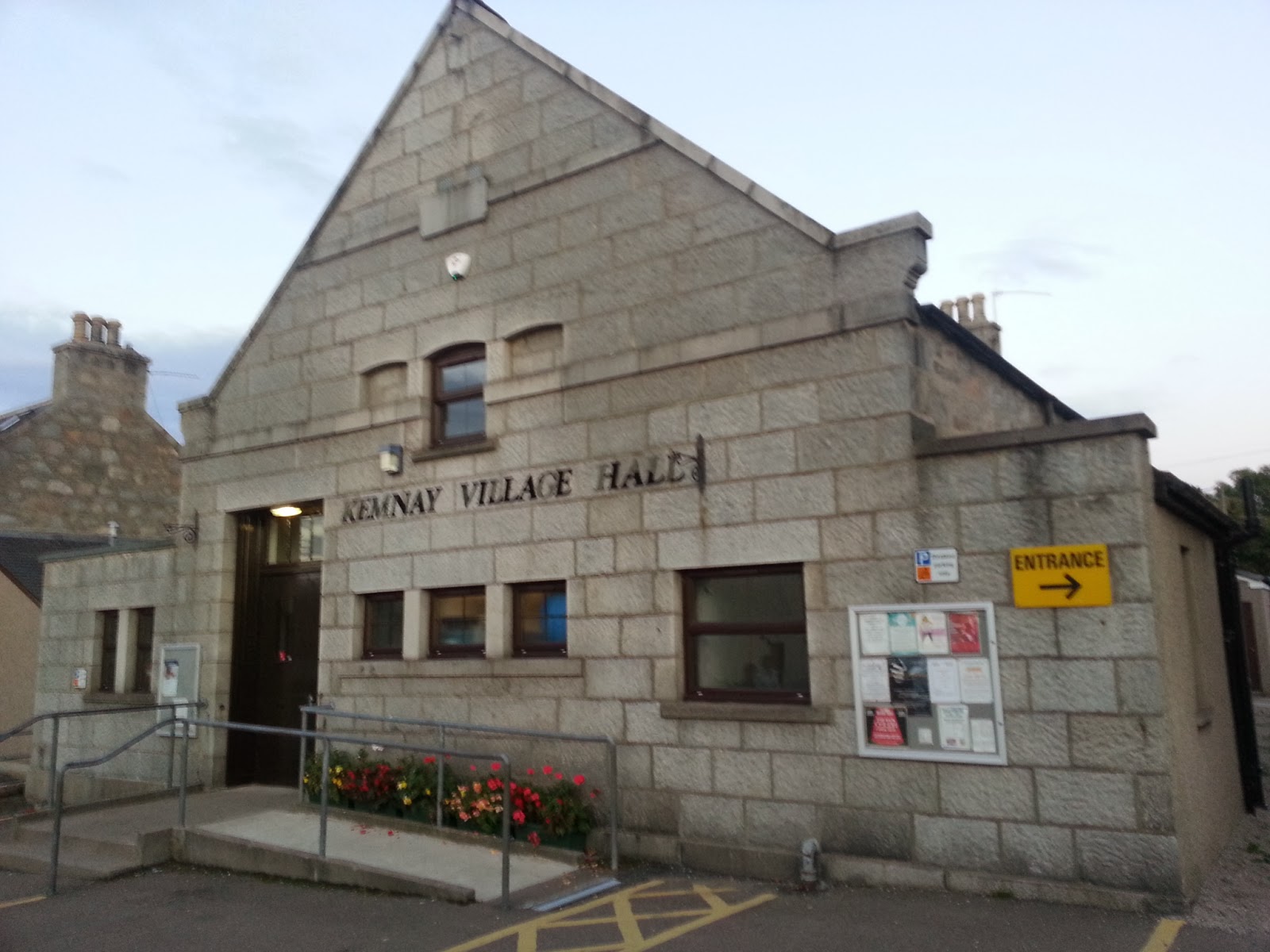 We were given loads of cakes and tea as we set up for the evening - yum :-) As on Berneray, and a few other halls since, we had the question again of whether to play at the side of the hall, or on the length. We chose the former once more - much, much more intimate and allows the audience into our world more :-) From backstage, we heard the hall filling up, and again extra seats were added! The whole front row was full of Mr. Eilbeck's family and friends - he always has the biggest fan-club :-)

Together with Helen, the lovely promoter in Portsoy, we had decided to do a 3pm show, since it was a Sunday. It's a family show, and you can't keep folk up on a school night! Helen and her team had done an amazing job of spreading the word, and had even advertised Afternoon Tea - with scones! - as being part of the ticket price. Ace! It always tickled me that the tickets could be purchased from Portsoy's famous ice-cream shop :-) Also, my Mum - A.K.A Magic Macrae, as I think I'll call her - did loads of work letting people know that Dr. Macrae's granddaughter's play was coming to the village!! Mum - you're the best :-)

Portsoy's Town Hall is a beautiful old building, and was the perfect setting for our final show. We used the meeting room upstairs as our dressing room, and on the walls hang portraits of all the town's provosts (inc. Dr. Macrae), going way back. So I felt quite stirred by the history of the place, and as we watched the audience arriving from this upstairs window, we were all excited to finish things with a bang.

And we did! The huge hall was full of people, and a lovely crowd they were too. The music sounded divine, and of course, being our last show - on this tour at least - it all felt extra poignant to us.

I want to thank Helen and her team - for inviting us to Portsoy, for the pancakes, for doing a great job spreading the word. A big thank you to my Auntie Ismay, who allowed our troupe to stay in her cottage - so very much appreciated. Thank you to Maisie Bruce, a friend of said Auntie's, and my Mum's, who also put us up and fed us!!

Thank you Emyr and Ruth at NEAT for all your help and support :-)

Thank you to my Mum - Jean Turner - who looked after us so well on the last leg of our tour. We arrived to mountains of food and warm beds, and you were a perfect hostess to this weary lot. It was a special and wonderful time :-) 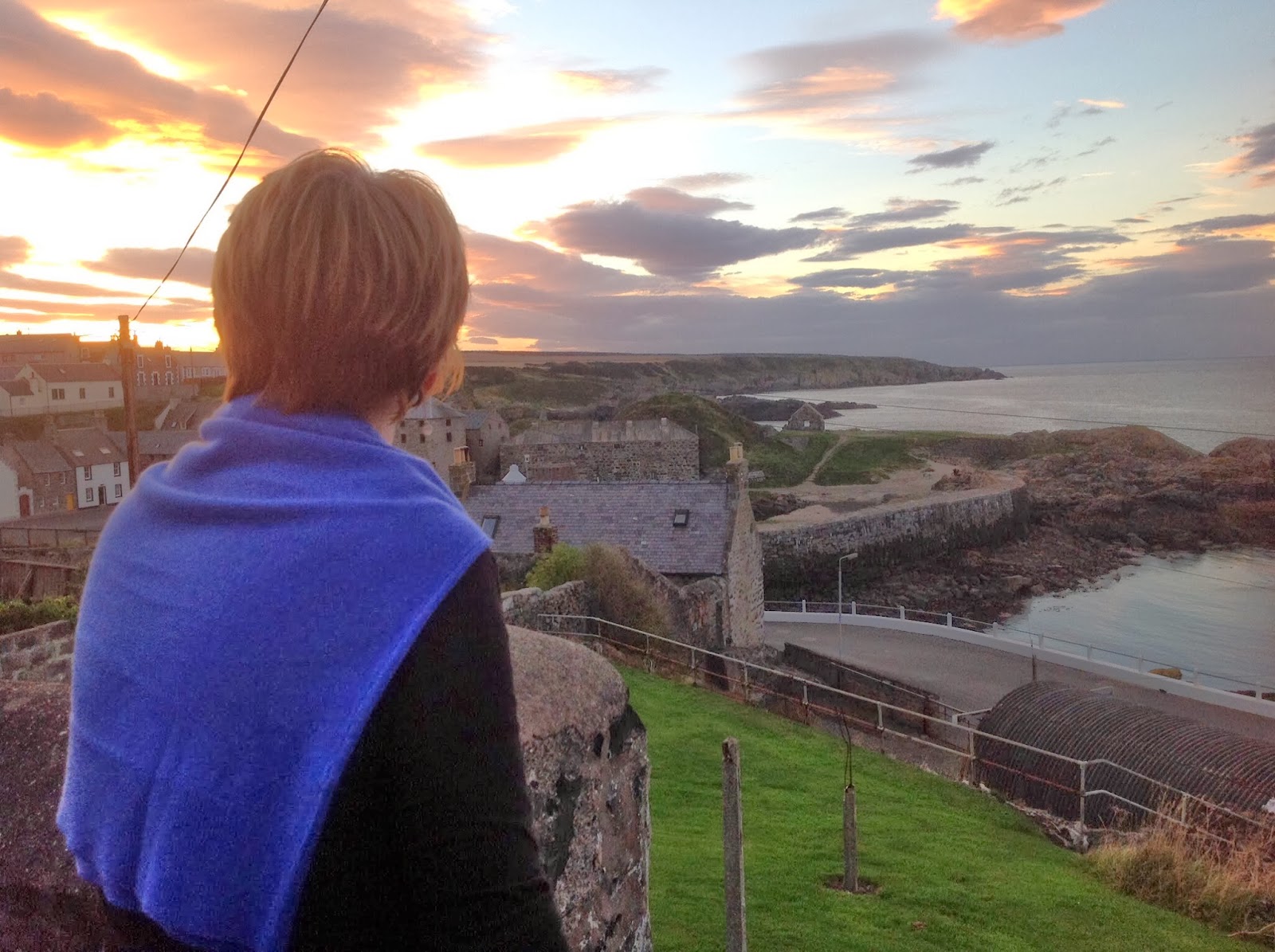 Before I finish, I want to offer a huge Thank You to our director, cast and production team for coming on this journey with me. Can't wait to work with you all again in the near or distant future: it's been a privilege.

On this day we crossed to the historic and beautiful island of Canna. The usual Calmac ferries were in dry-dock, so we lucked out and got a ride across on a wee pleasure-cruise boat - usually hired out for spotting whales and dolphins! 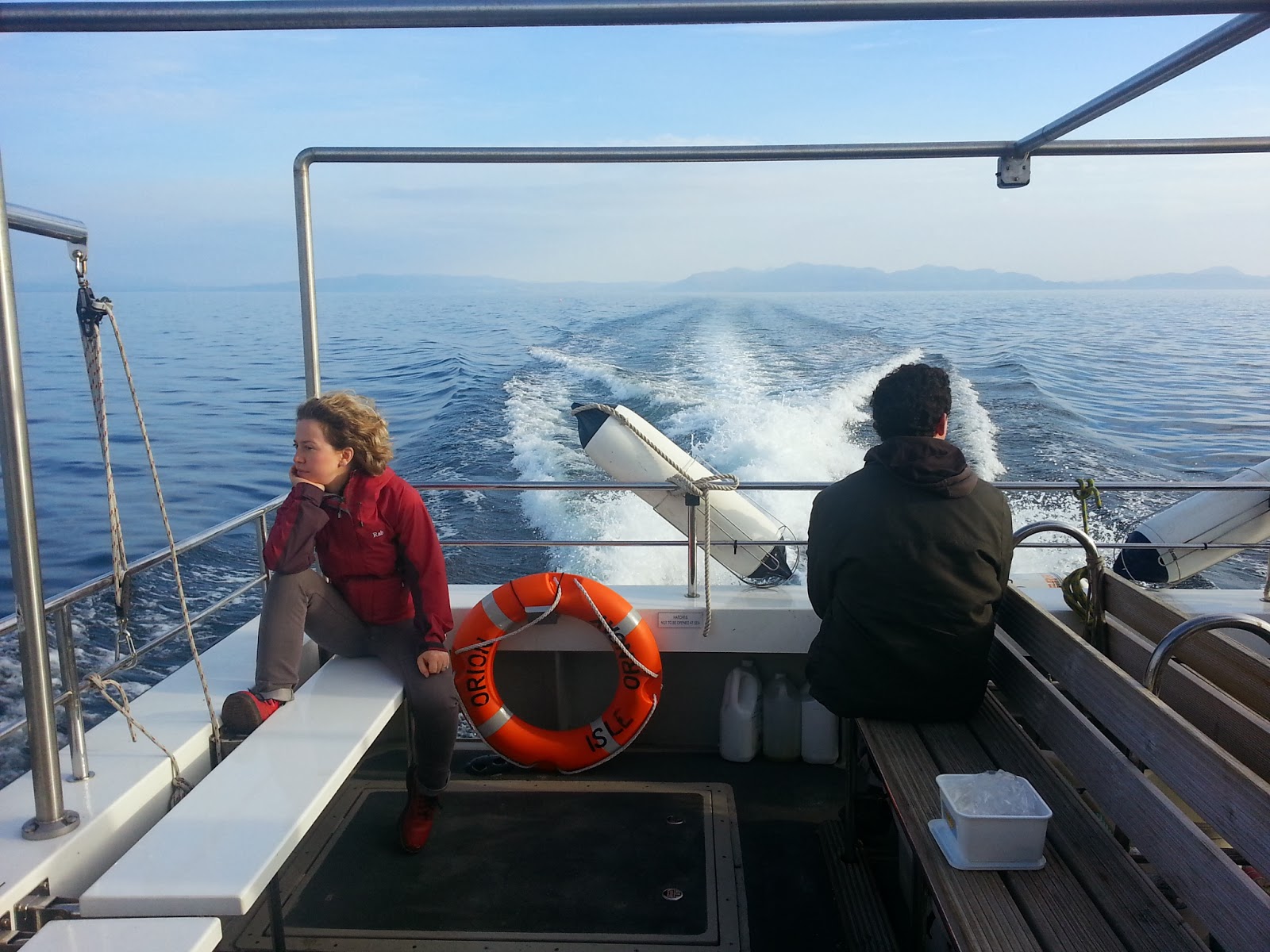 It was a magical crossing. We went via Eigg and then Muck, where Simon saw a magical horse and I played my fiddle to the ducks. 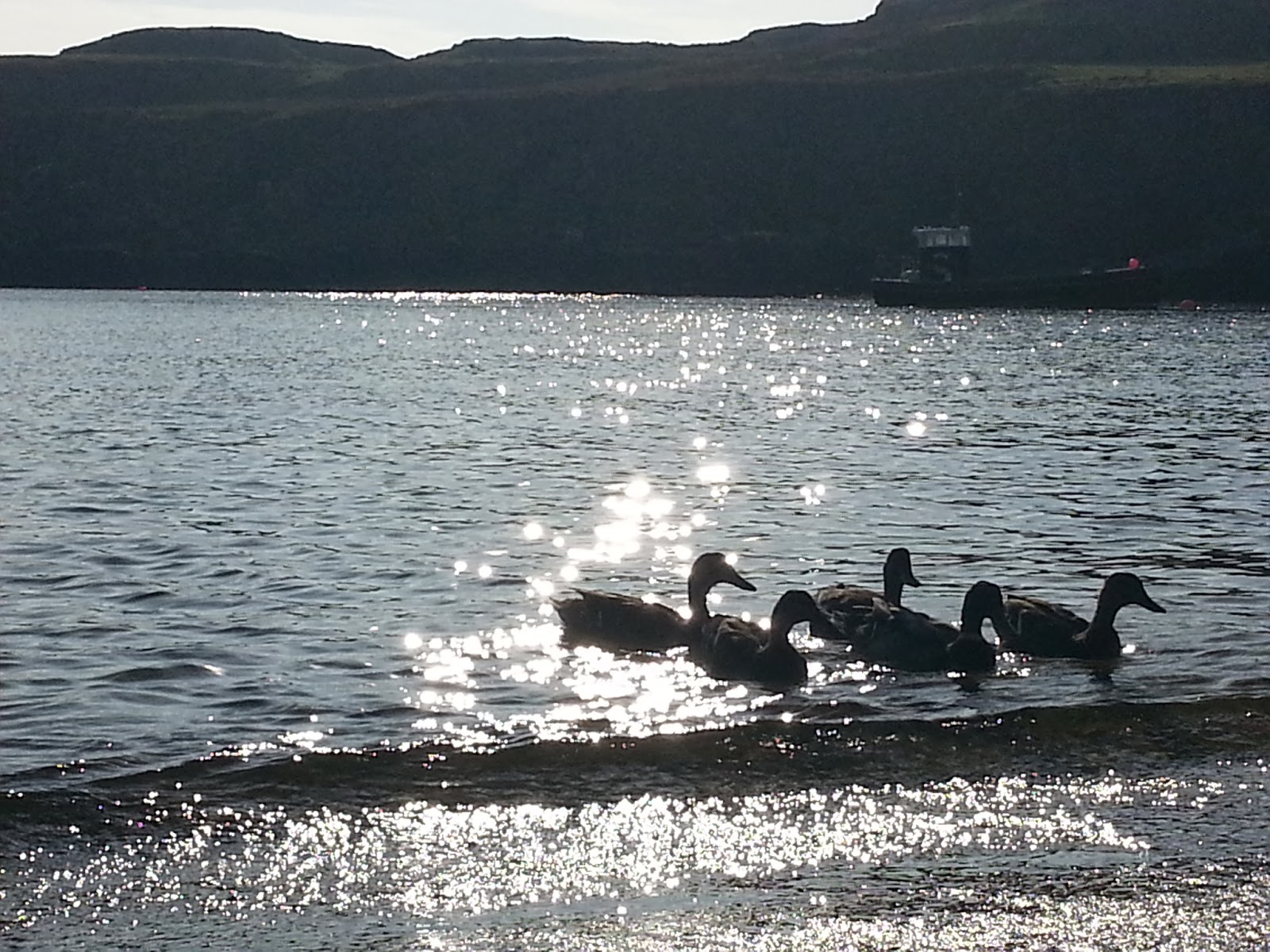 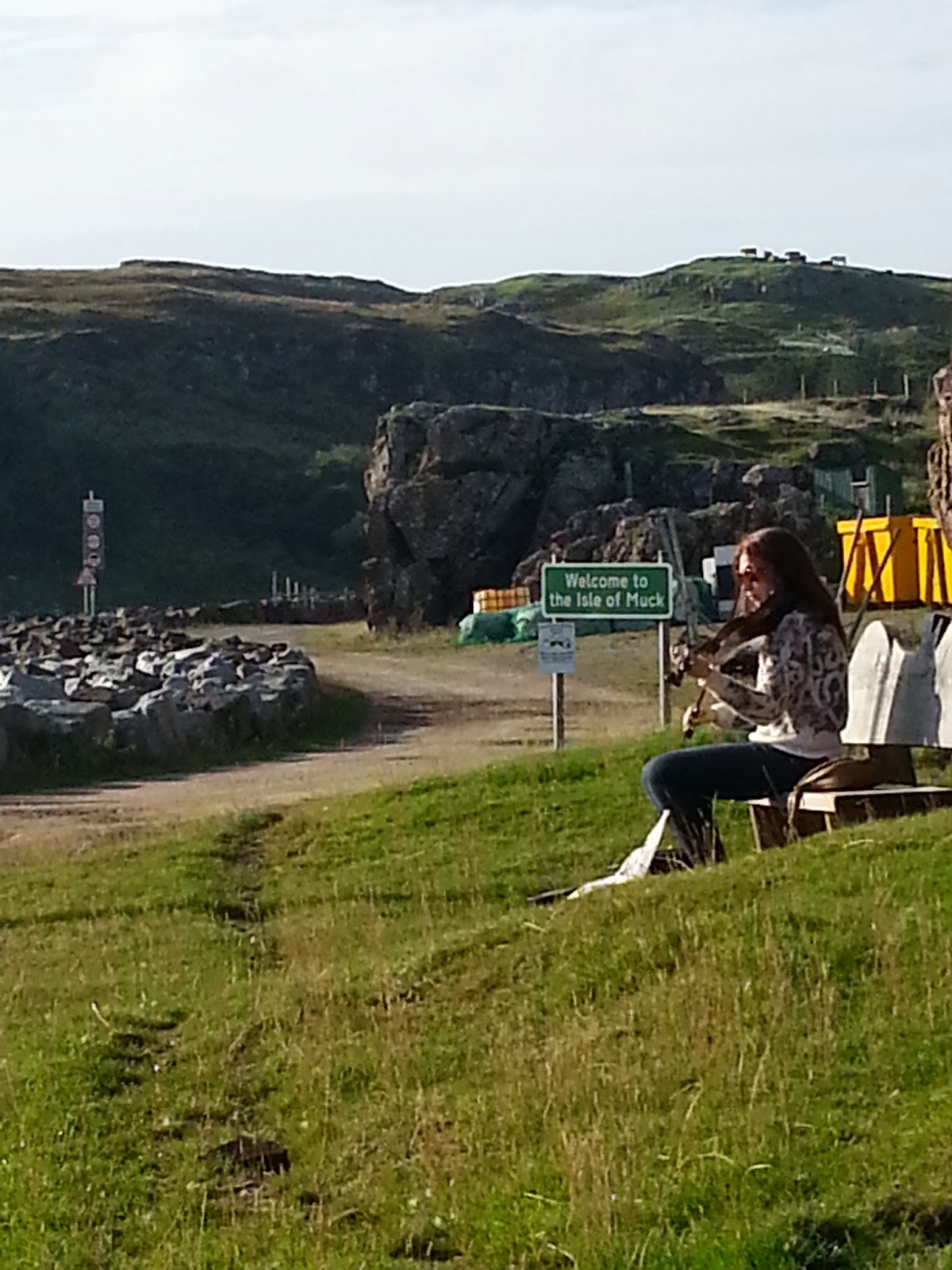 We were met off the boat on Canna by our lovely, marvellous hosts, who escorted us around the island's single road (which, naturally, becomes submerged in high tides...) to our home for the next two nights... 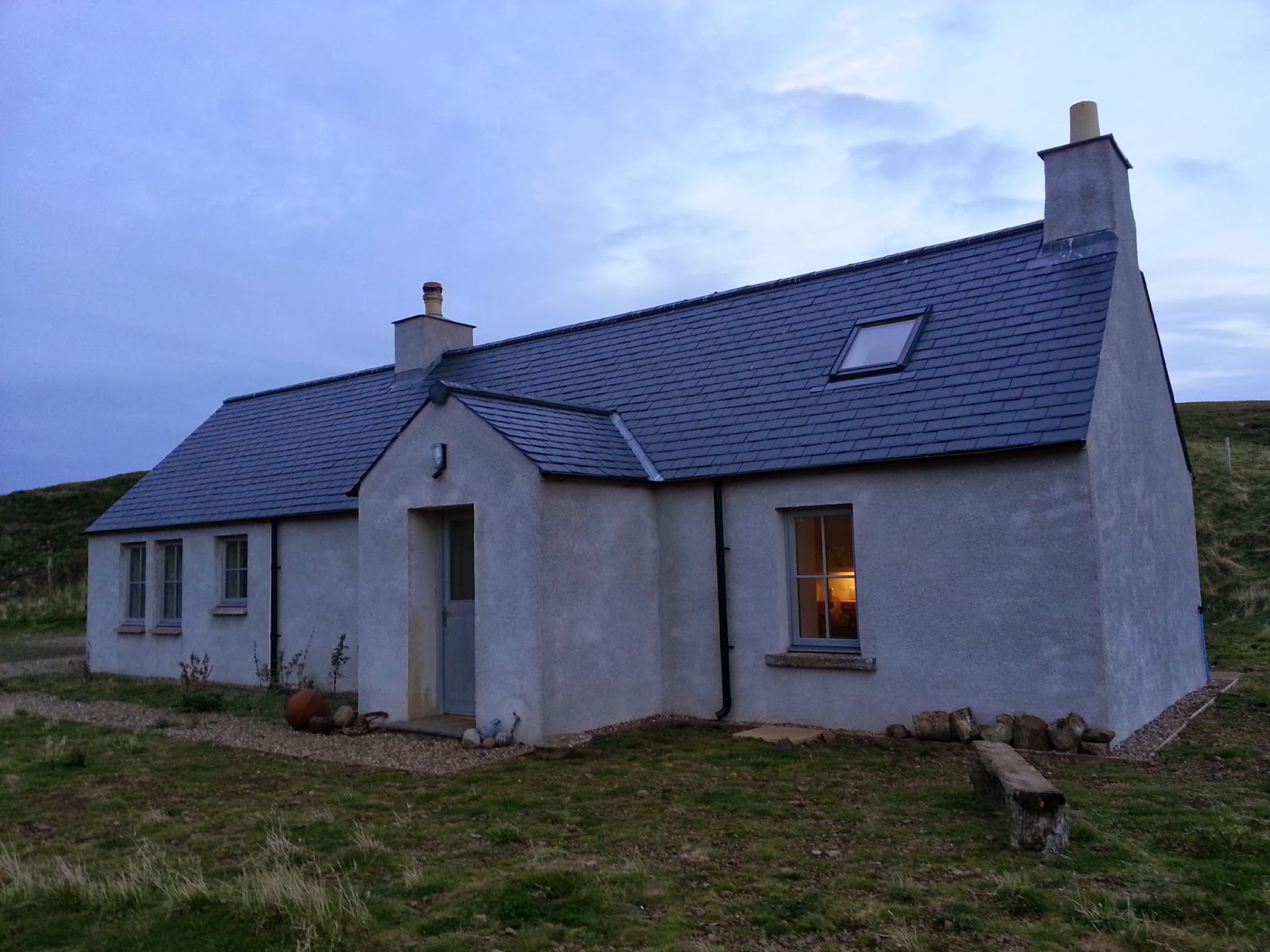 Beautifully cosy, and with a kitchen all ready to go, a couple of us got to work on dinner, whilst the others went to check out our venue! 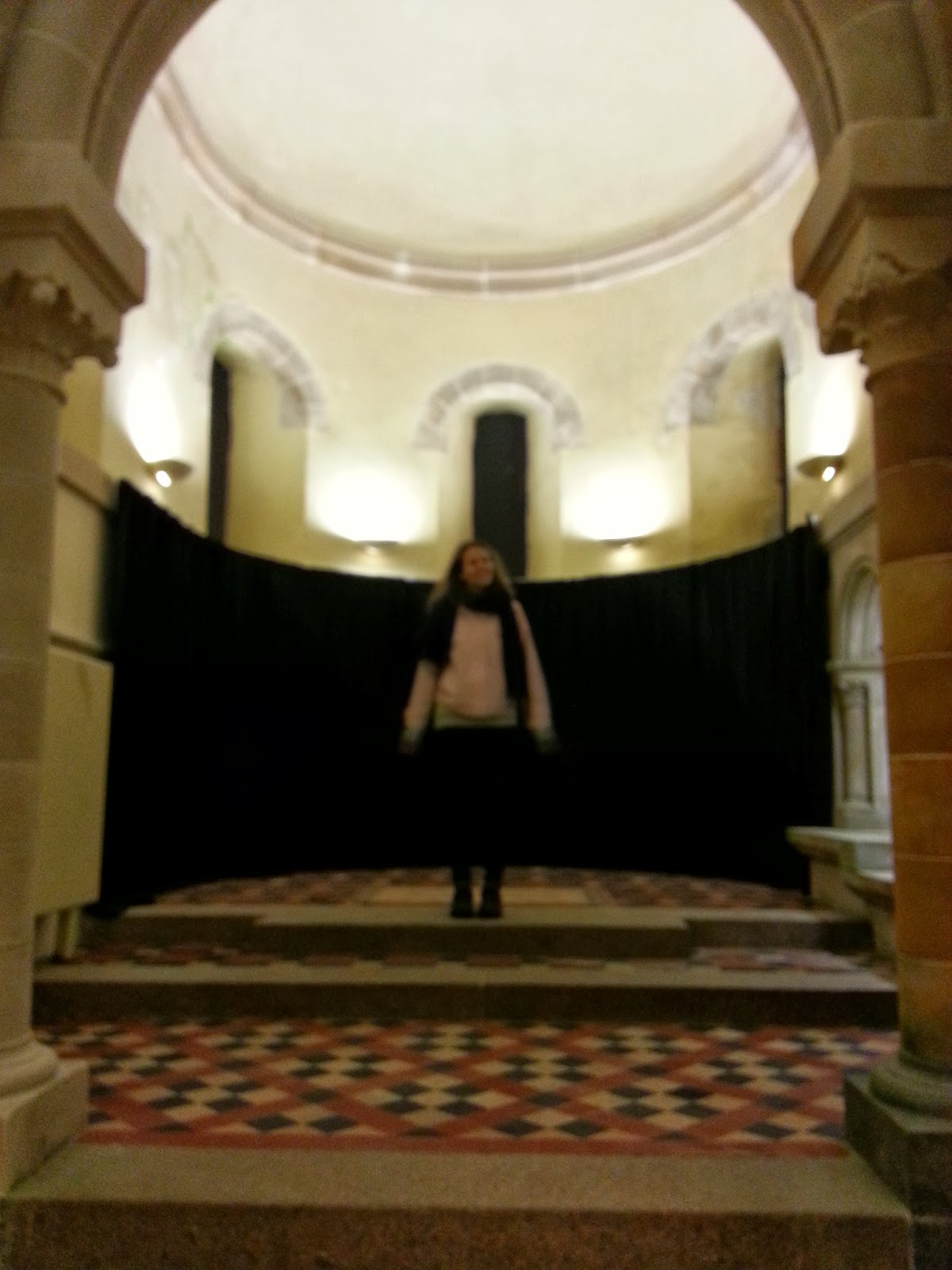 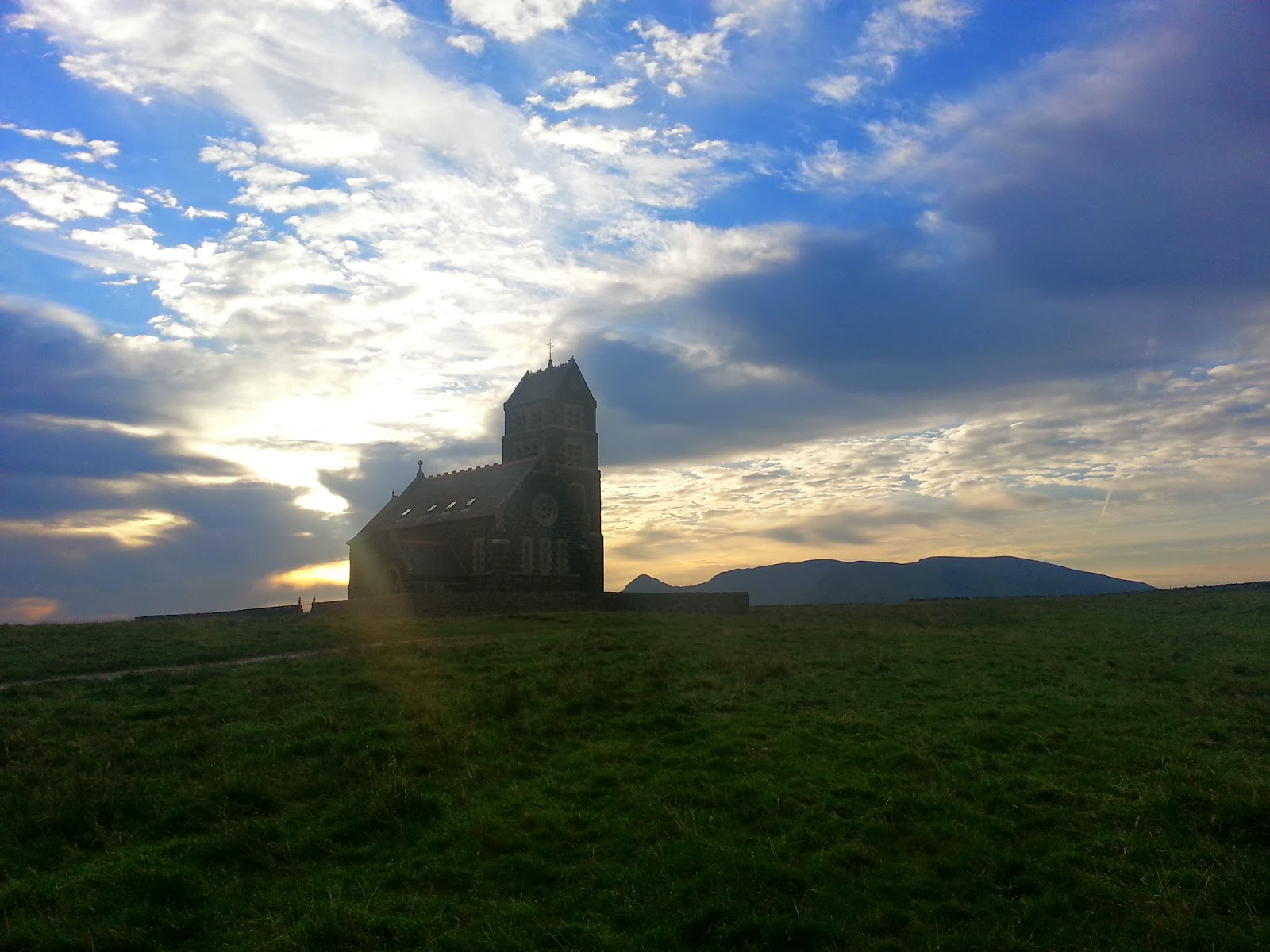 This is the new Camus Arts centre, and is a converted chapel - absolutely stunning and an ideal space for intimate theatre. In fact, we ended up placing the audience here, where Ms. Goldie is standing, and playing down here at the other end... 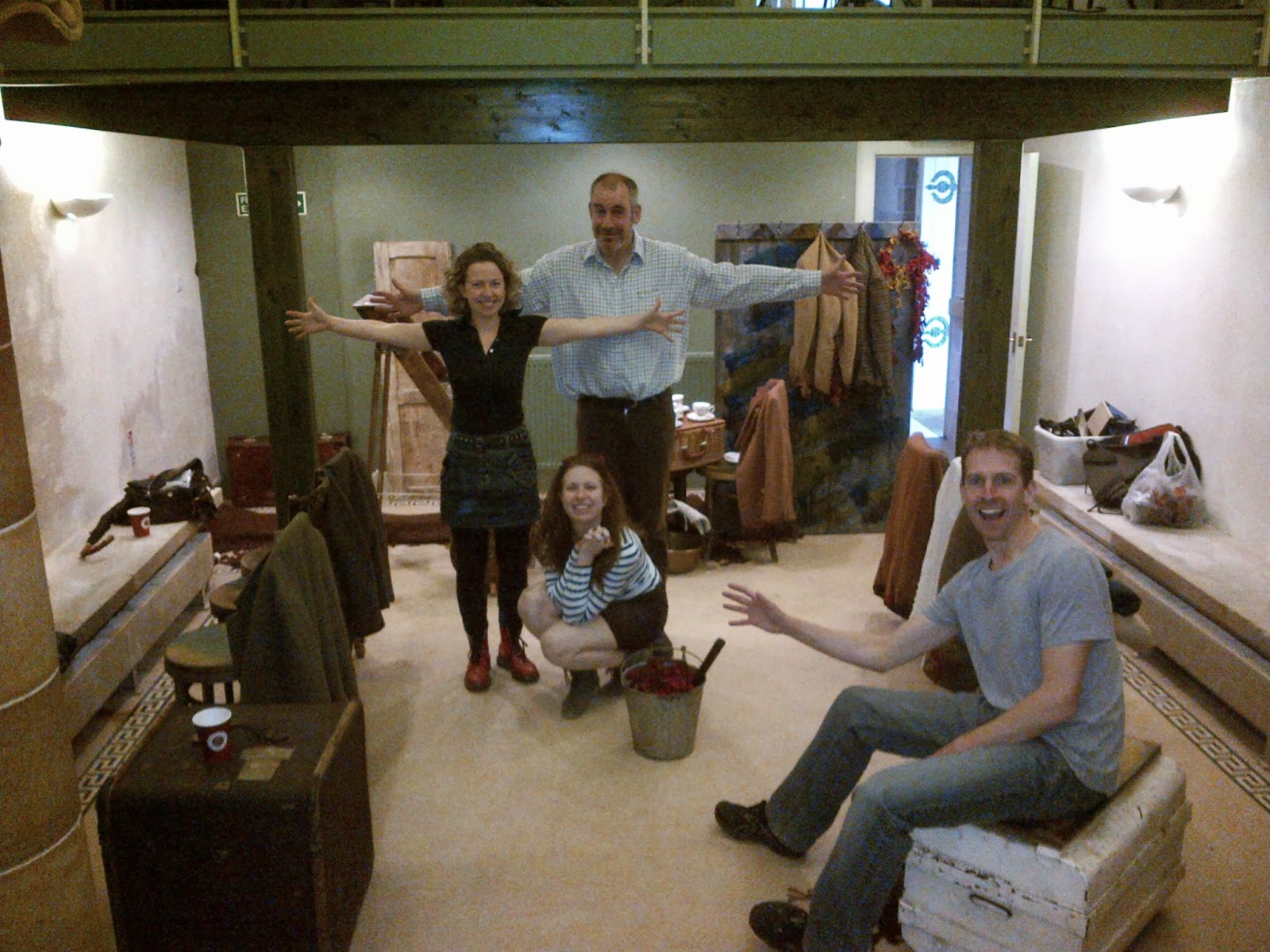 And have you ever seen such a pretty (and holy) dressing room? 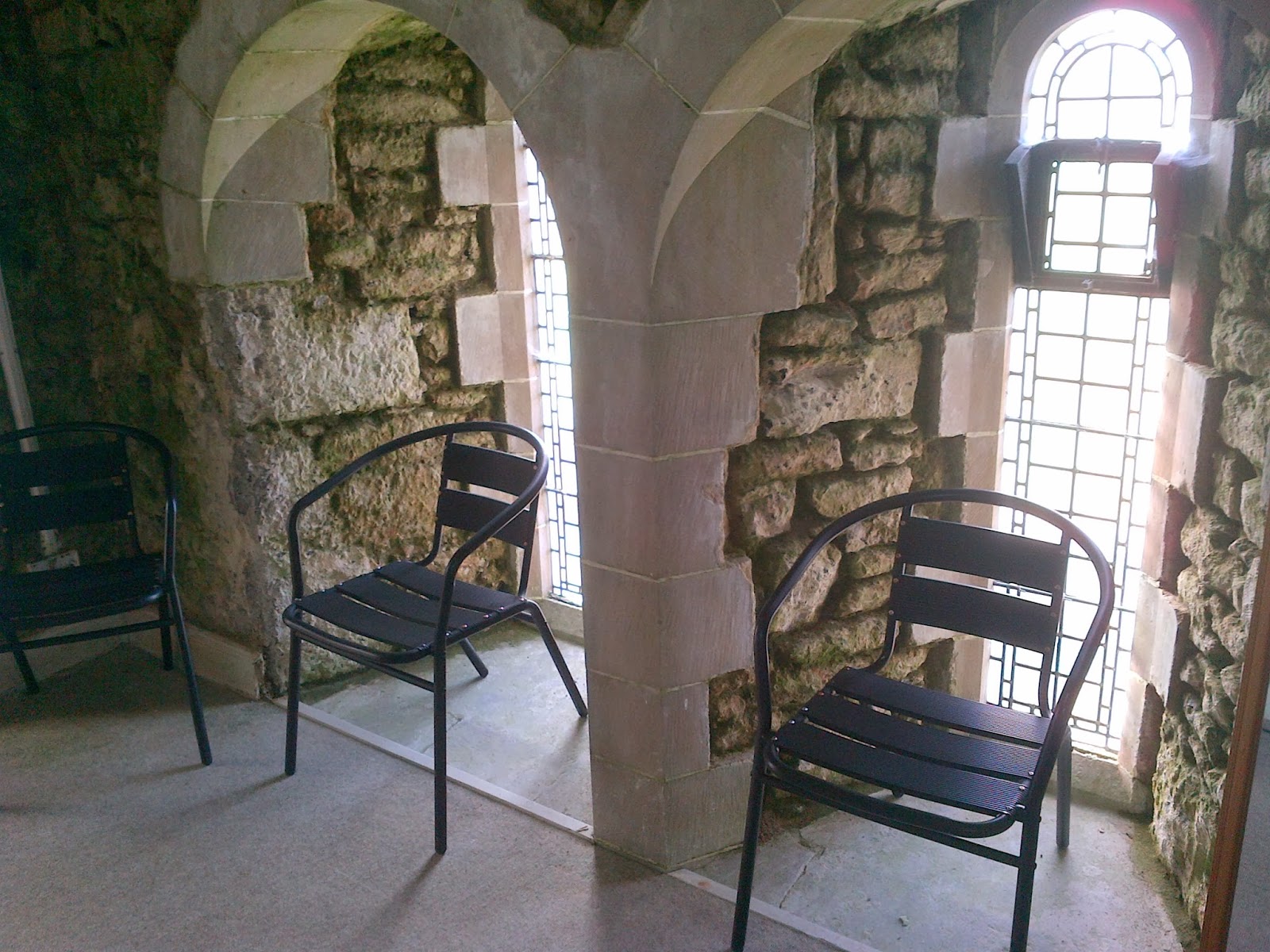 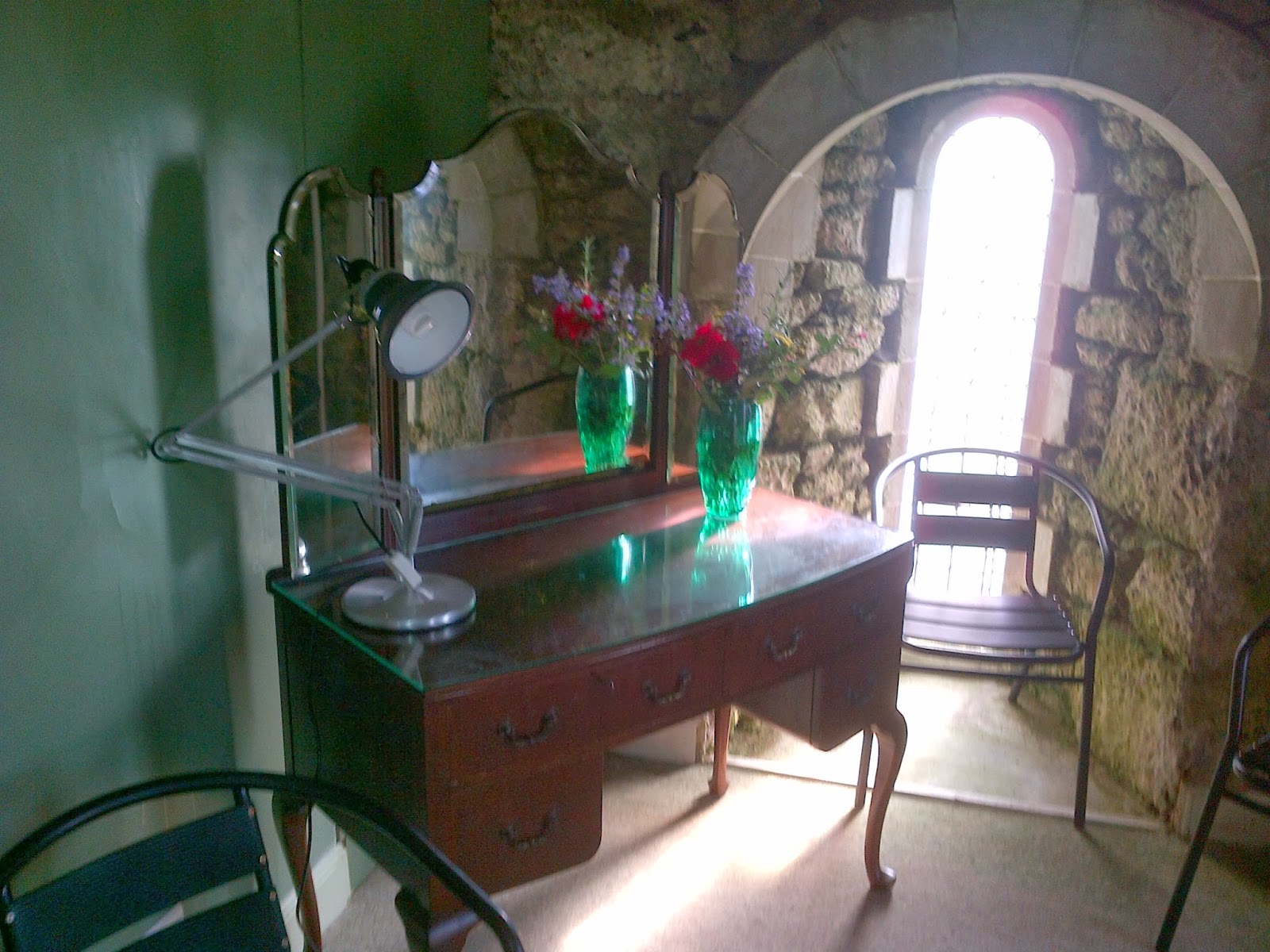 We adjusted the set and blocking of the show to play what was a considerably smaller space, and the show was magic. It got off to an electric start when the connector for Annie's pipes ran away and hid itself in the grass before the show - so both the cast and audience, who were by then gathered outside the venue, helped to search for it......and someone found it! Cue much cheering! We went up a little late - but since the only way outta there was by boat and we were all there for the night, we figured no one was in a hurry! The island has a population of 11, and there were 15 in our audience....which means some people came over especially on the boat!! How awesome's that?? In fact, we met two of them on the crossing over, and assured them they were in for a theatrical feast :-) Perhaps it was the intimacy of the space, or the fact that it was a holy place, or that this was probably the smallest, most far-flung island we would play on and resembled the play's island - but there was something utterly bewitching about doing the play there. They thought so too, and gave us a standing ovation and lots of tears. Result :-) So much love for Canna hope to return.

Thank you so much Stuart and Julie for showing us around Tigh Mhor - the house once lived in by the eminent folklorists John Lorne Campbell and Margaret Fay Shaw. It's been preserved just as they left it - as if they just stepped out for a walk :-) Thank you for introducing us to Margaret's dog, Patchou!! We discovered him guarding our dressing room when we came up for the interval... 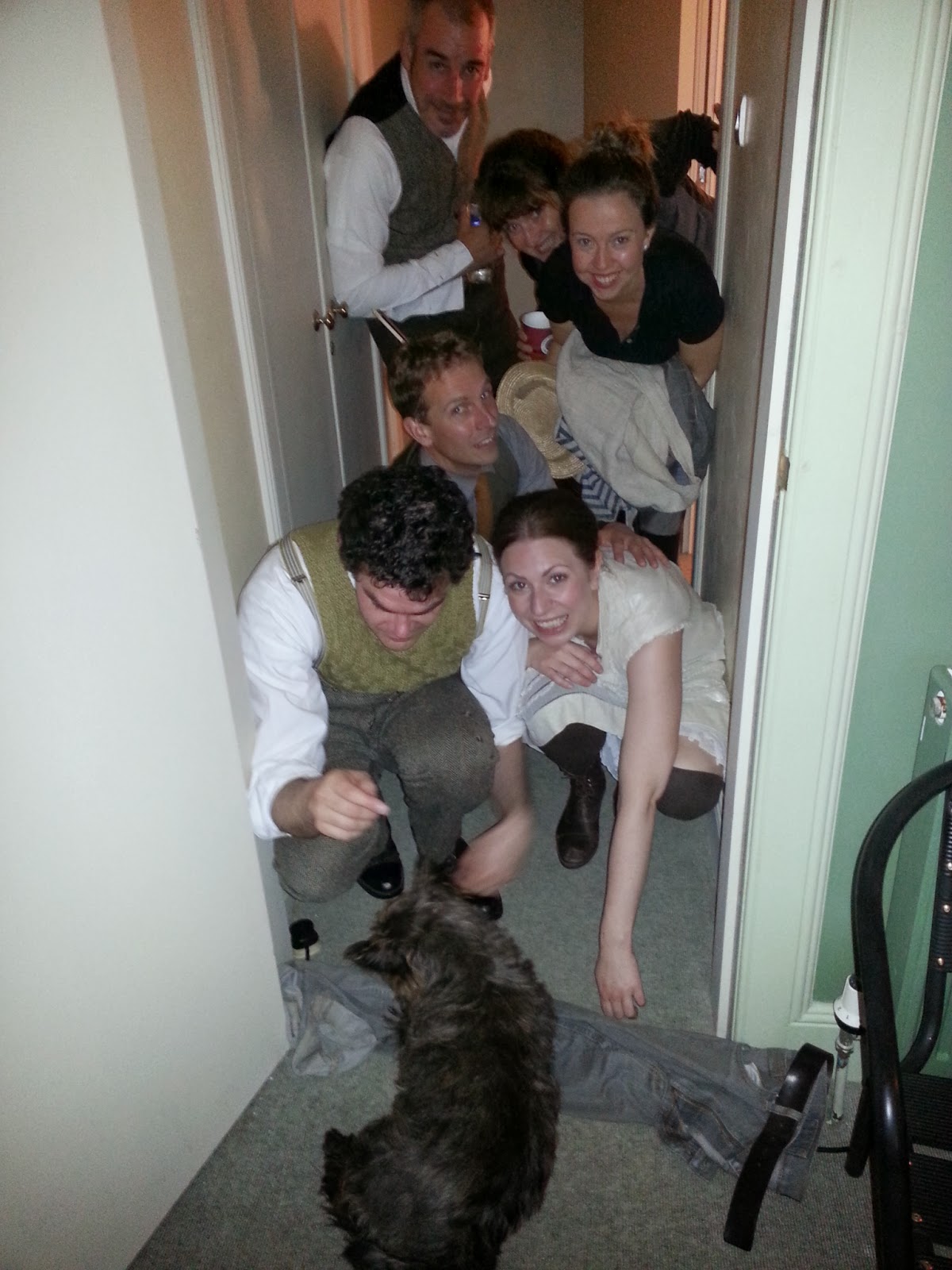 A few more Canna pics, just because they're so pretty. Thank you Mr. Eilbeck! 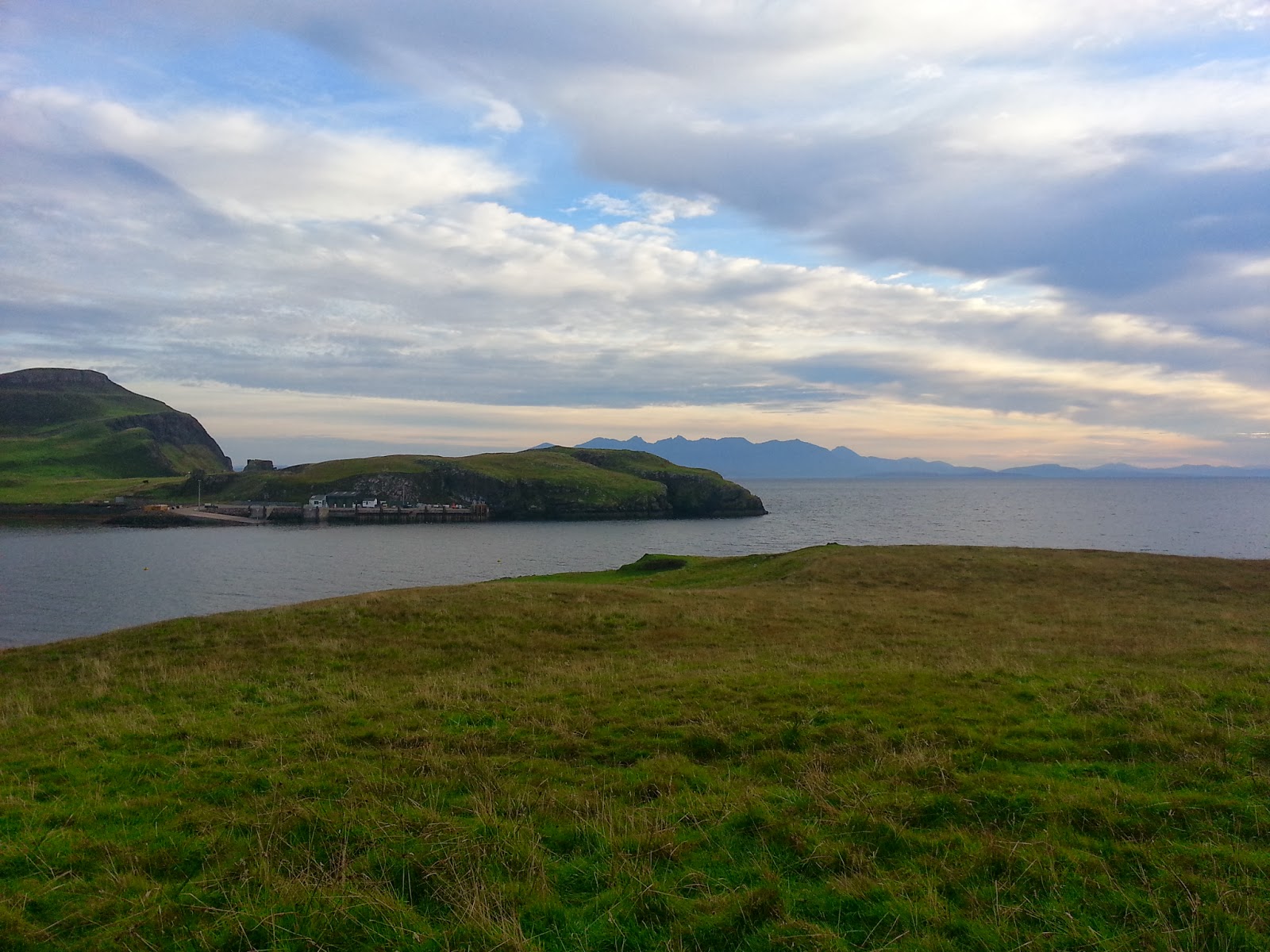 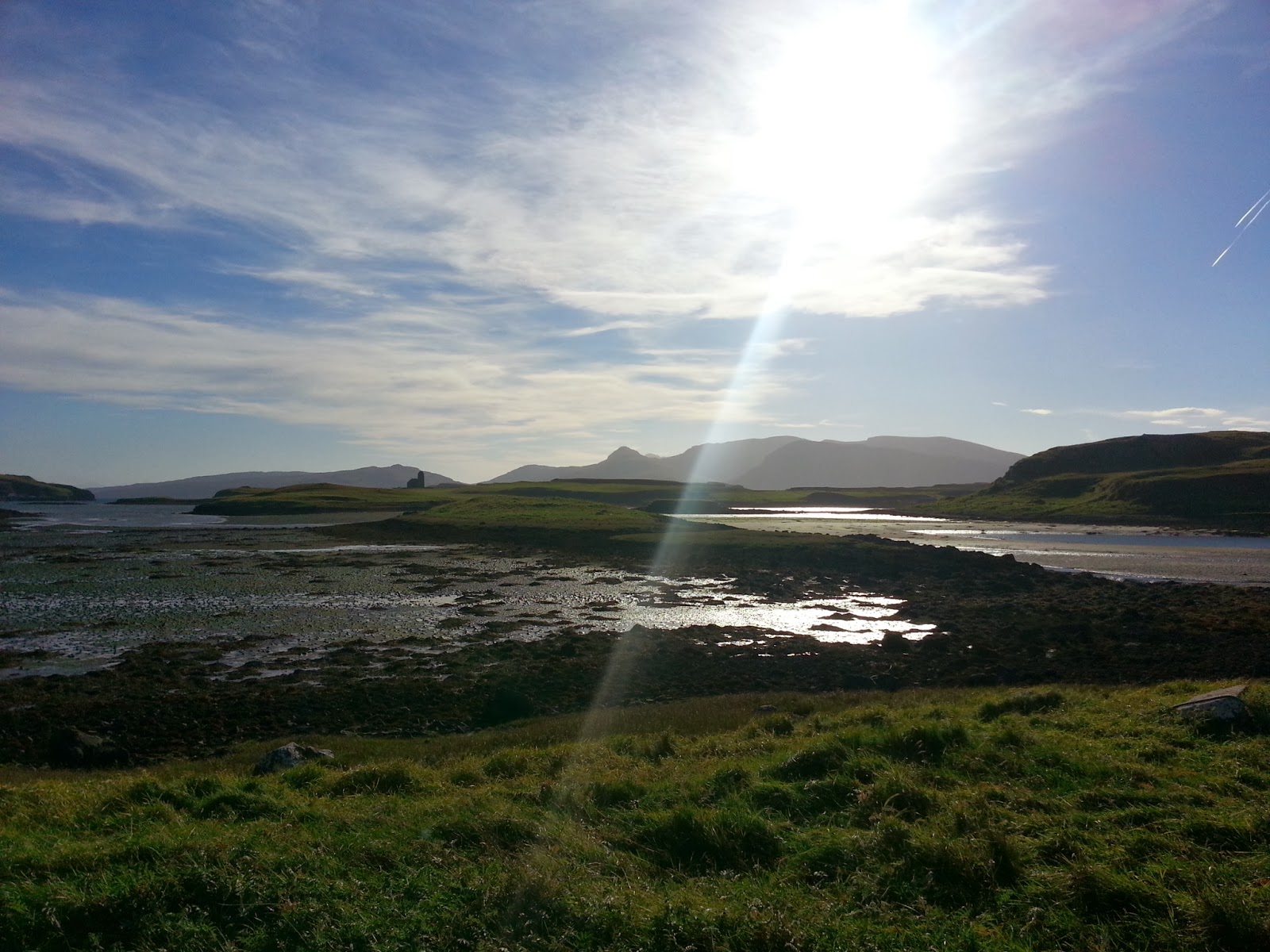 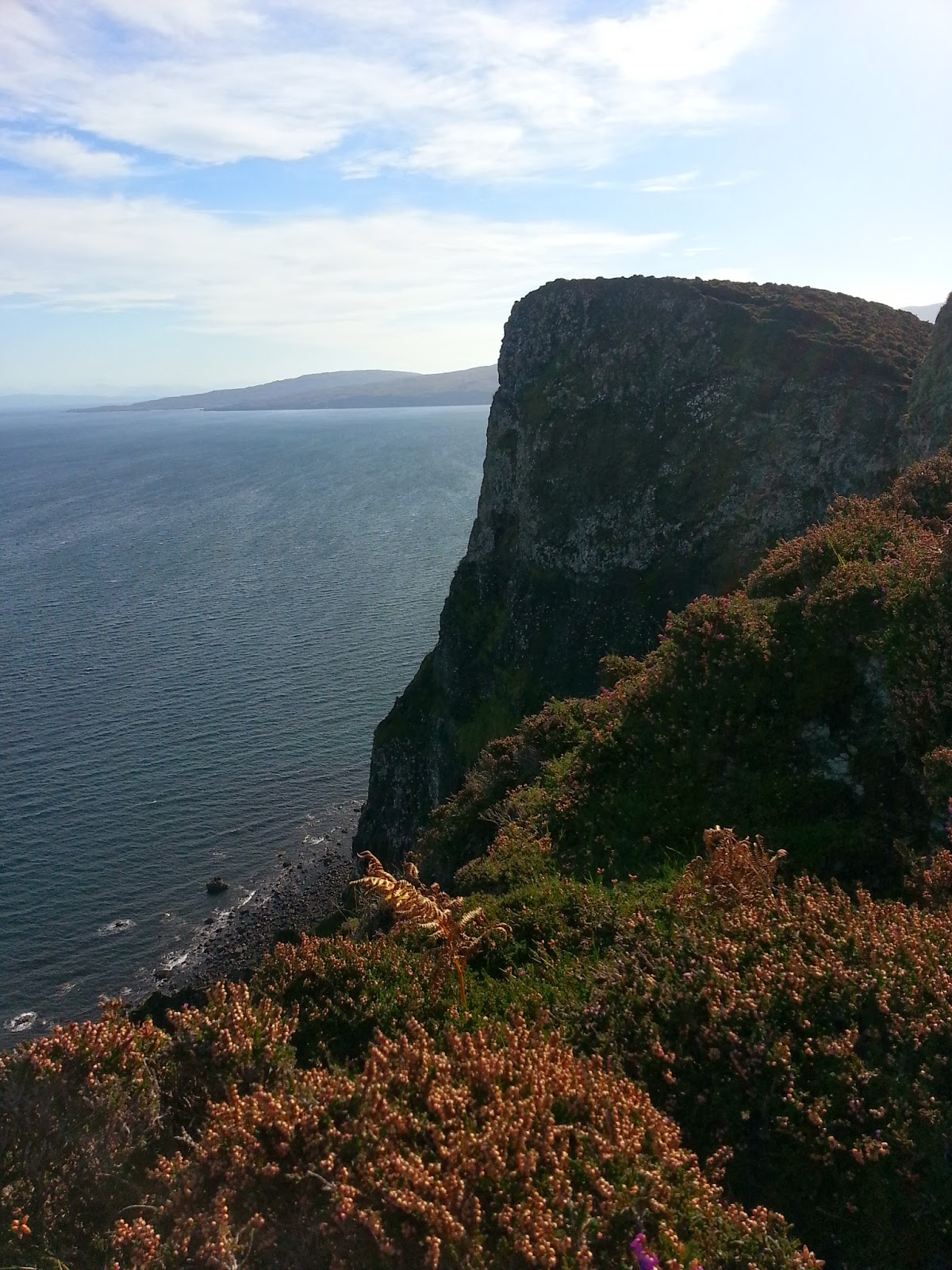 After two days and nights on Canna, where we performed and cooked and drank whisky and played games (heads down thumbs up, anyone?) and - in the absence of any street lights whatsoever - looked at more stars than we'd ever seen, we left utterly happy and, I think, a little changed by the serenity of that magical place. I remember we were all a little quieter on the journey back - so many great memories bedding down :-)

We crossed from Canna, via Rum (where we saw loads of deer sunbathing!) and back to Mallaig. From there we drove to Oban and stayed there for the night, after devouring some amazing seafood. On the Tuesday, we took the short ferry ride over to Mull, passing none other than 'THE MAIDEN'S ISLAND' on the way!! I was very excited to see the actual wee island which inspired the story, in some versions, which inspired me to write the play. Magic.

Mull Theatre is AWESOME! I hadn't imagined it would be so huge - a great big atmospheric black box space - and yet surprisingly intimate as the (raked) audience comes almost right up to the edge of the ground-level stage. I remember being so excited to do a lovely long warm-up in there - there's nothing quite like an empty theatre :-) When showtime came, Annie and I walked out to start the ceilidh, and the house was almost full - what a treat! So brilliant to see so many folk on Mull coming out to a play - and again, definitely some Gaelic speakers in the house, getting all the jokes quick-sharp. Lovely crowd to play for. Thank you to Sheena and all at the theatre for having us :-)

We stayed the night on Mull and travelled back to Oban the following day. We were all looking forward to being in our own beds for a night ahead of our Edinburgh show...

Hello Edinburgh!! By the time Thursday morning came, we'd sold out Traverse 1, and there was nothing for me to do except try to CHILL OUT before the show.....man, I was excited! Since we're an Edinburgh-based company, and began 'The Idiot at the Wall' with Edinburgh audiences, it was thrilling to be bringing this improved, developed version of the play back here. While we were all warming up and getting used to the space, Emily gave us some great advice, which was to bring all of the incredible magic of the past couple of weeks on the road to our audience here, on this big stage - to bring those sensory memories of the landscape and sea-crossings and kind Hebridean people here and share them. I think that's what we did, and we had a blast. The audience seemed to like it, too. What a night. Thank you to all at the Traverse, to all of you who came and showed so much love, and thank you Universe :-)