So today I've decided to dabble in a little retrospective blogging. Partly because there wasn't time/wifi on the road, and partly because I've been SLEEPING a LOT since our return, I haven't yet re-visited my beautiful memories of the tour. So I'll get started....

I'll pop up pictures to accompany as they come in. We all took some gorgeous/hilarious shots on the road and I'm still gathering them a'thegither....

We'll begin with some shots from our time at the lovely Becaon Arts Centre, in Greenock, where we opened the show and had a wonderful time :-) Check out the glamourous Ms. Goldie fixin' her hairdo! And we enjoyed eating in the Beacon's restaurant - delicious food and warm hospitality overlooking the water....perfect :-) 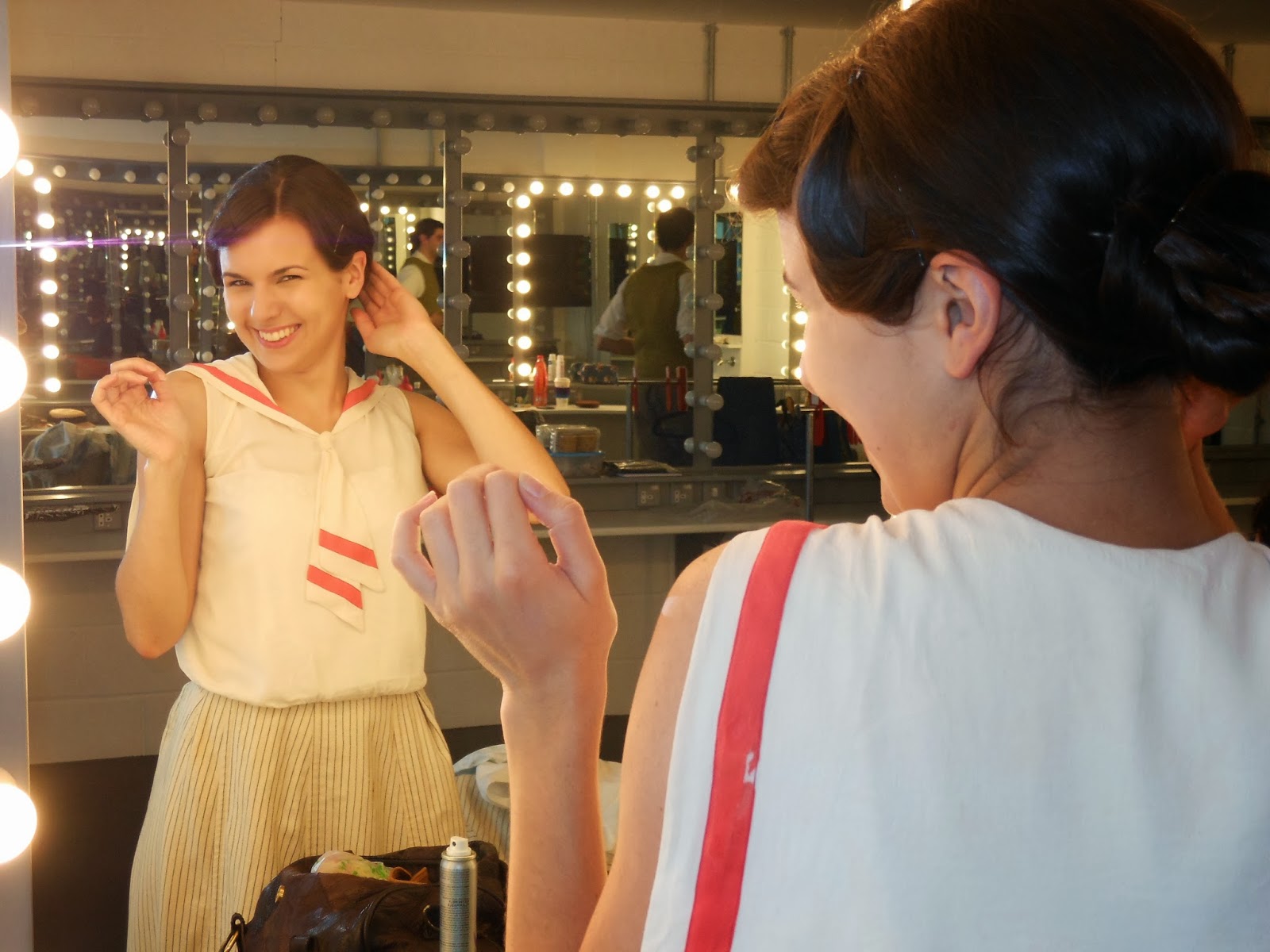 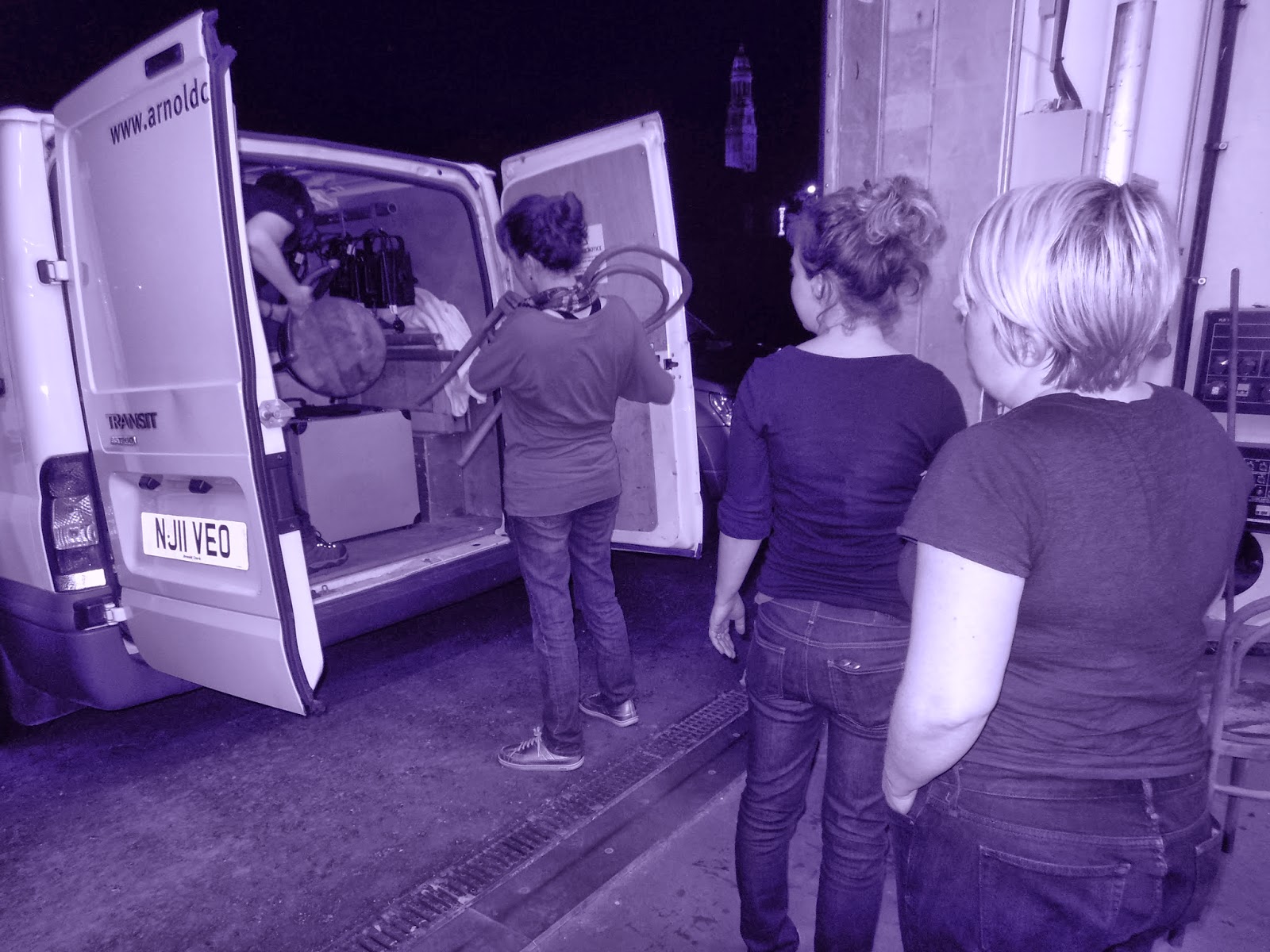 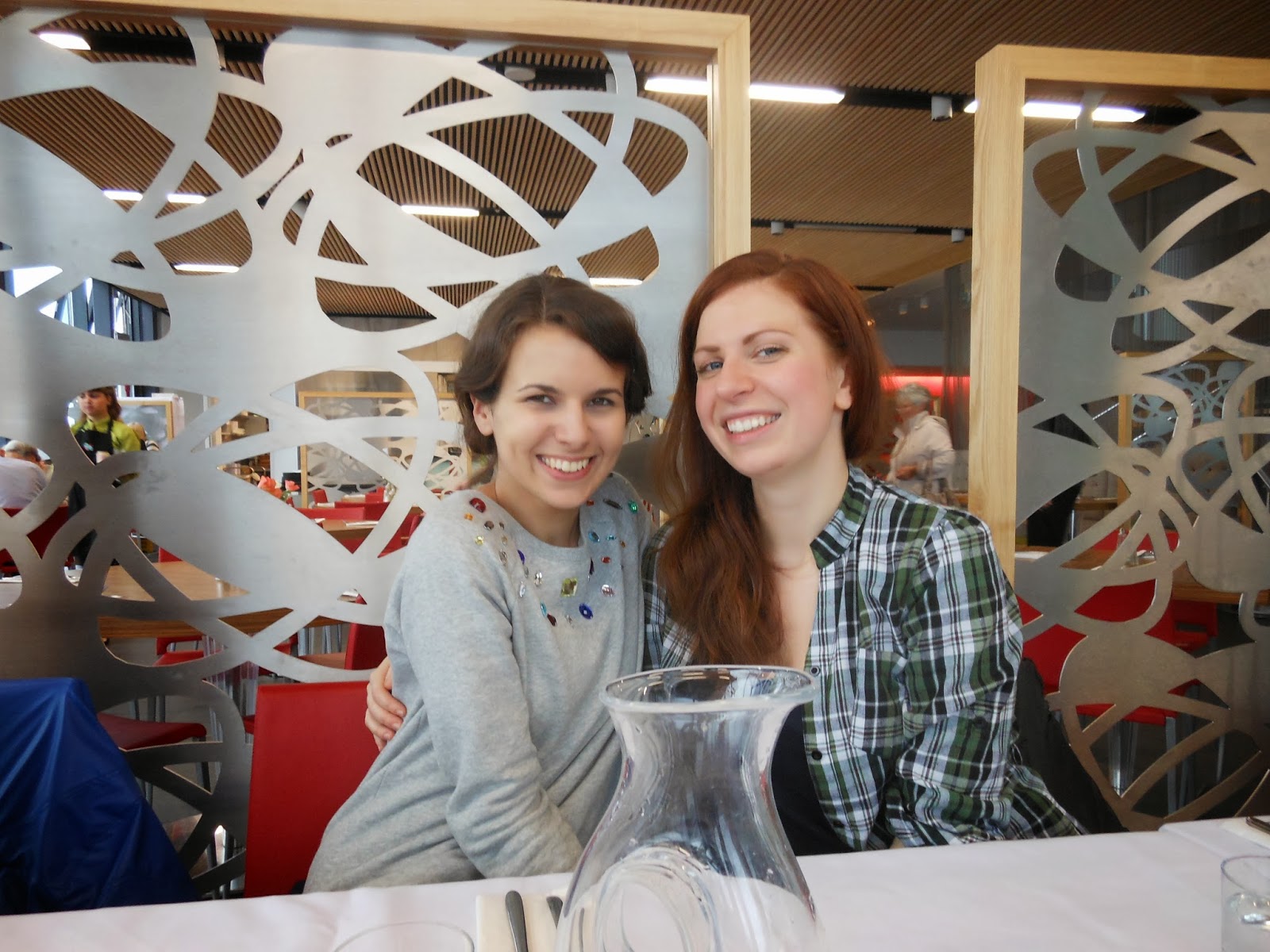 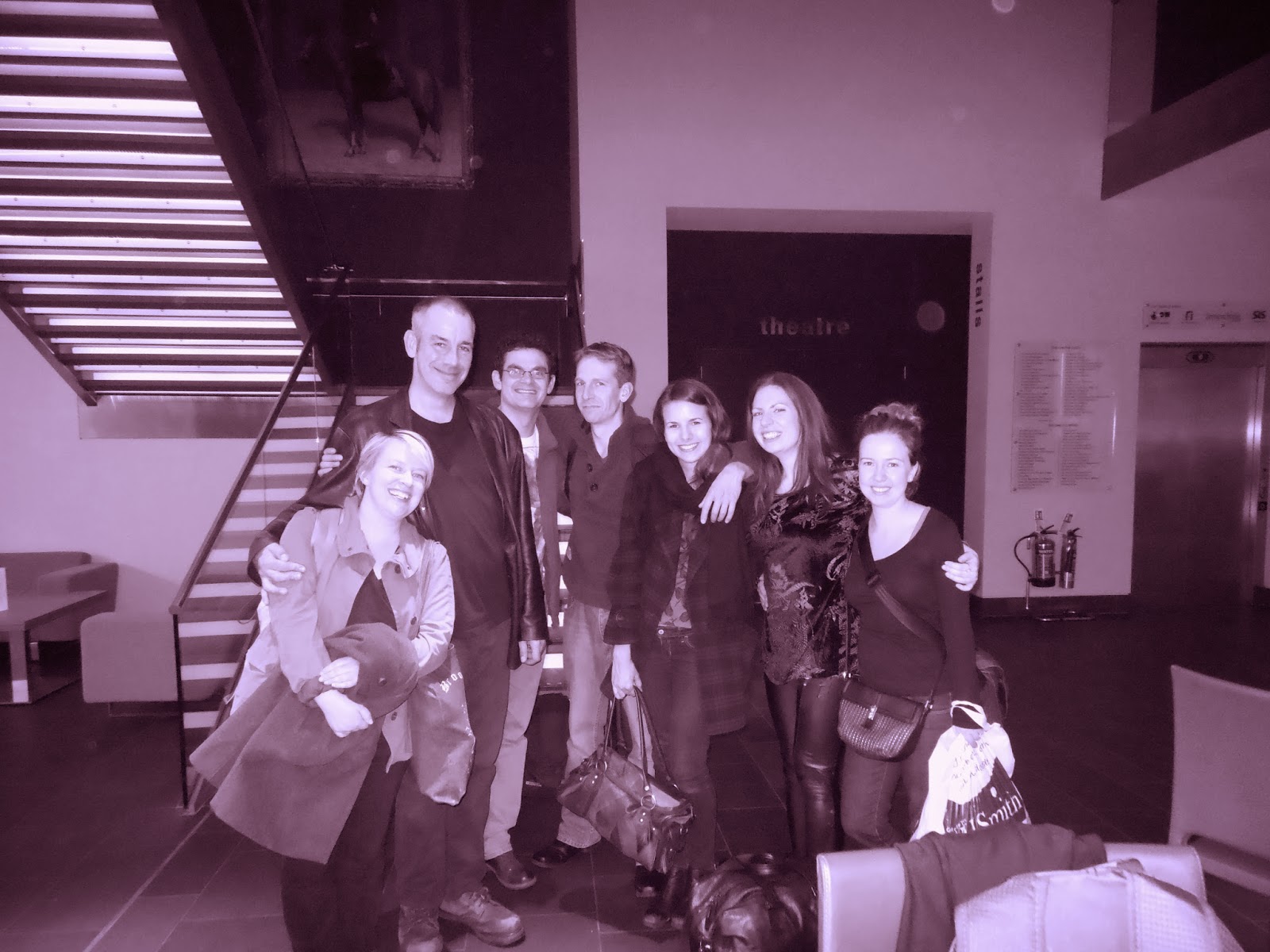 Above you see the first pack of the van going on. Our production manager, Susan, is in charge, then behind her you see an army of brilliant and tough women - our musician Annie, Producer Aiyana, and Director Emily. I took this photo thinking: these women could RULE THE WORLD! And the van was packed!

After a few drinks (and happy tears, on my part), we say farewell to our director, Emily Reutlinger, and head to bed before heading NORTH!!

We were all very excited as we discussed what on earth it would feel like to do this show in a village hall.....not long to go! 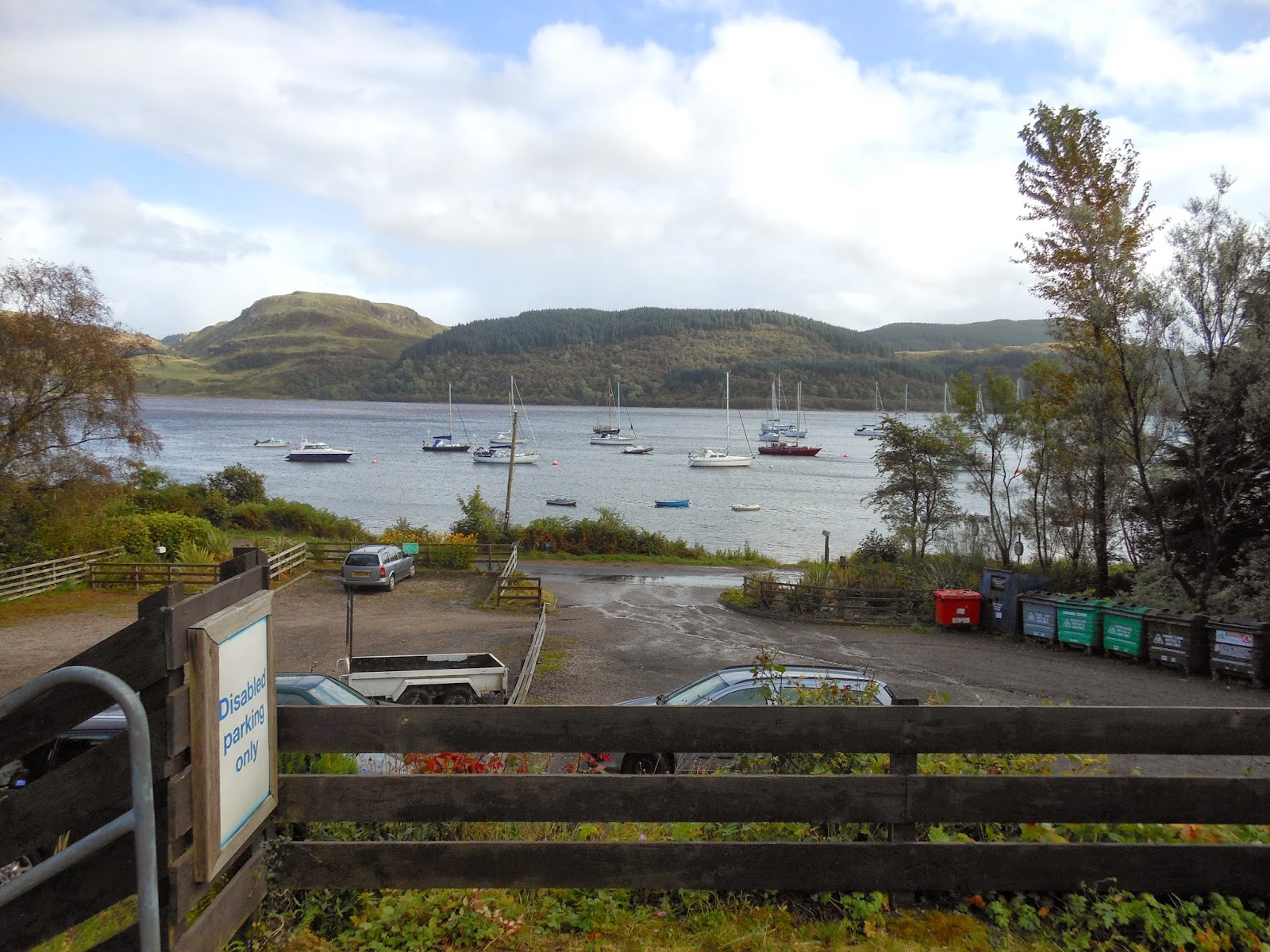 We left on the Sunday morning to make our way north to Craignish Village Hall...en route we reveled in stories, jokes, and some creative navigational techniques...then look at the view as we stepped out of the car! 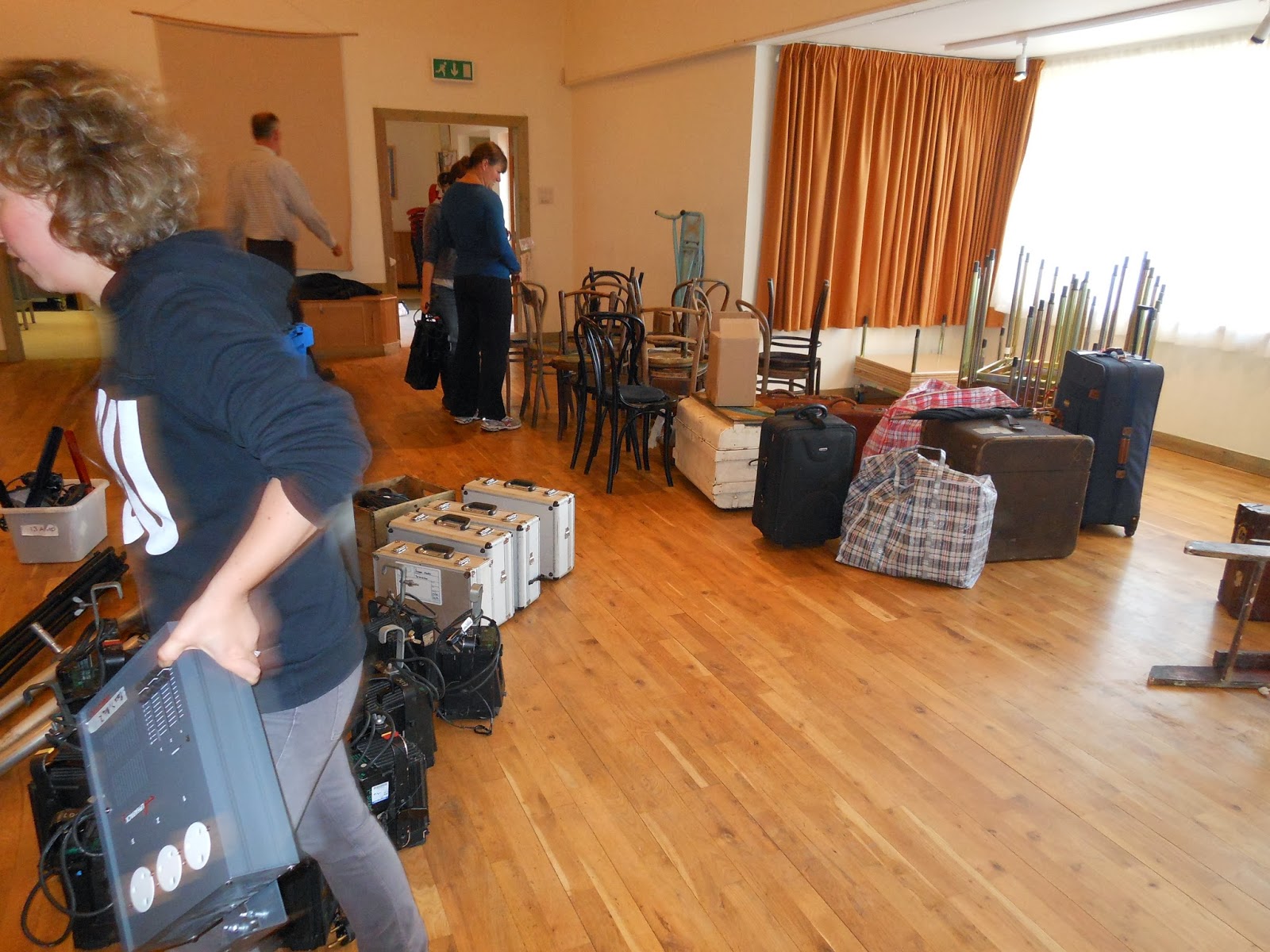 We were greeted by the lovely ladies who run the hall, who made us tea and fed us biscuits. Happy Idiots :-) Thrilled to be loading into our first village hall venue, we set about transforming the space into our wee croft house, with plenty of room for spectators :-) Haha, Goldie just lifted BOTH those boxes....they make 'em tough in  Rutherglen... 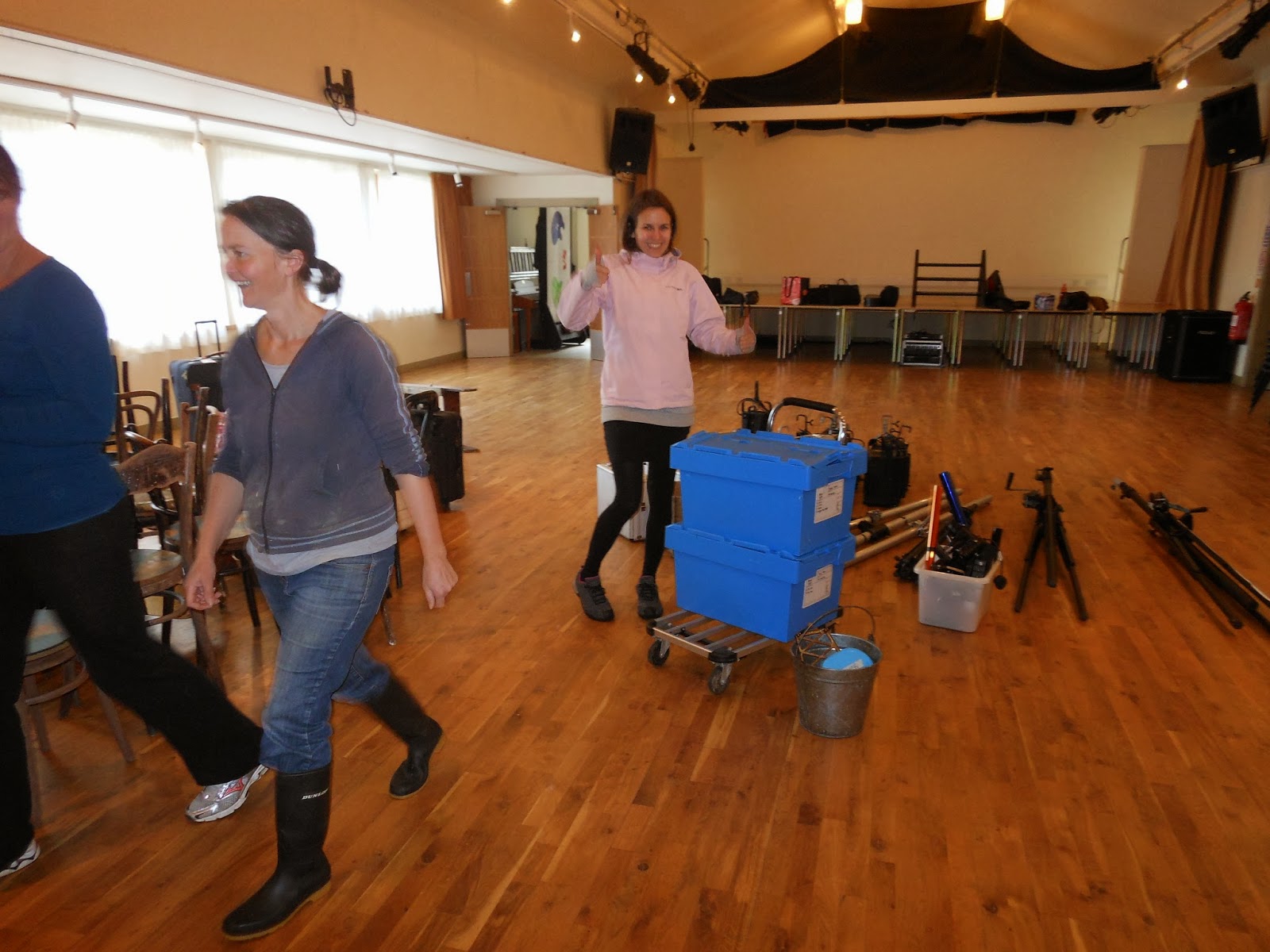 After loading in, we headed to our B&Bs for a wee nap....then it was back out to do the show!! 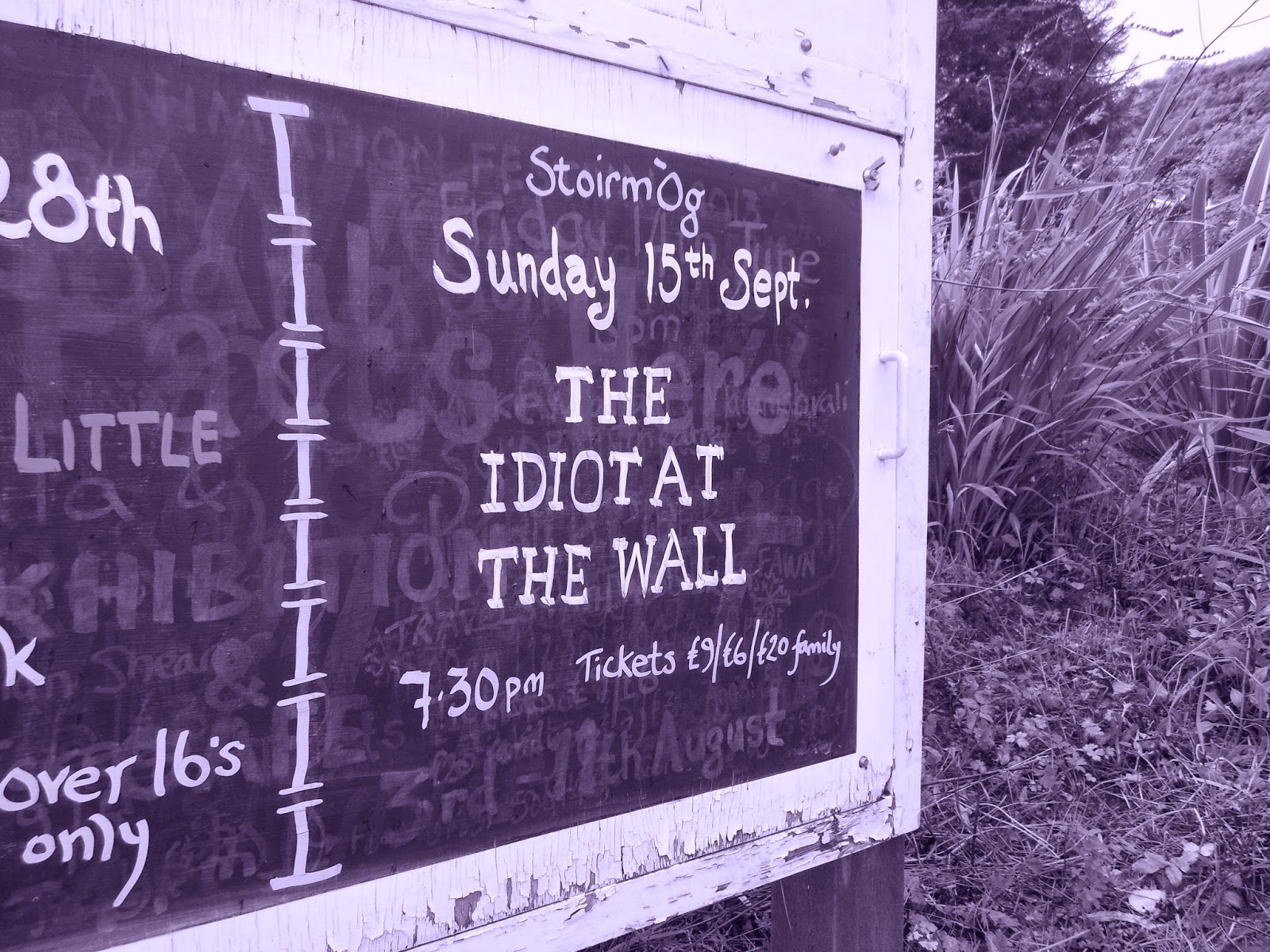 And what a show it was. The set looked so beautiful against the natural wood interior of the hall, Susan did a brilliant job lighting it, and the audience were enthralled. They had us out for two curtain calls! Super chuffed we were! We all commented afterwards on how great it was to be so close to the audience, and how it felt much more as if we were inviting folk to a ceilidh. Annie and I were getting into the swing of playing tunes together at the top of the show, and we loved the acoustics of the hall. Here she is afterwards practicing on the dulcimer! 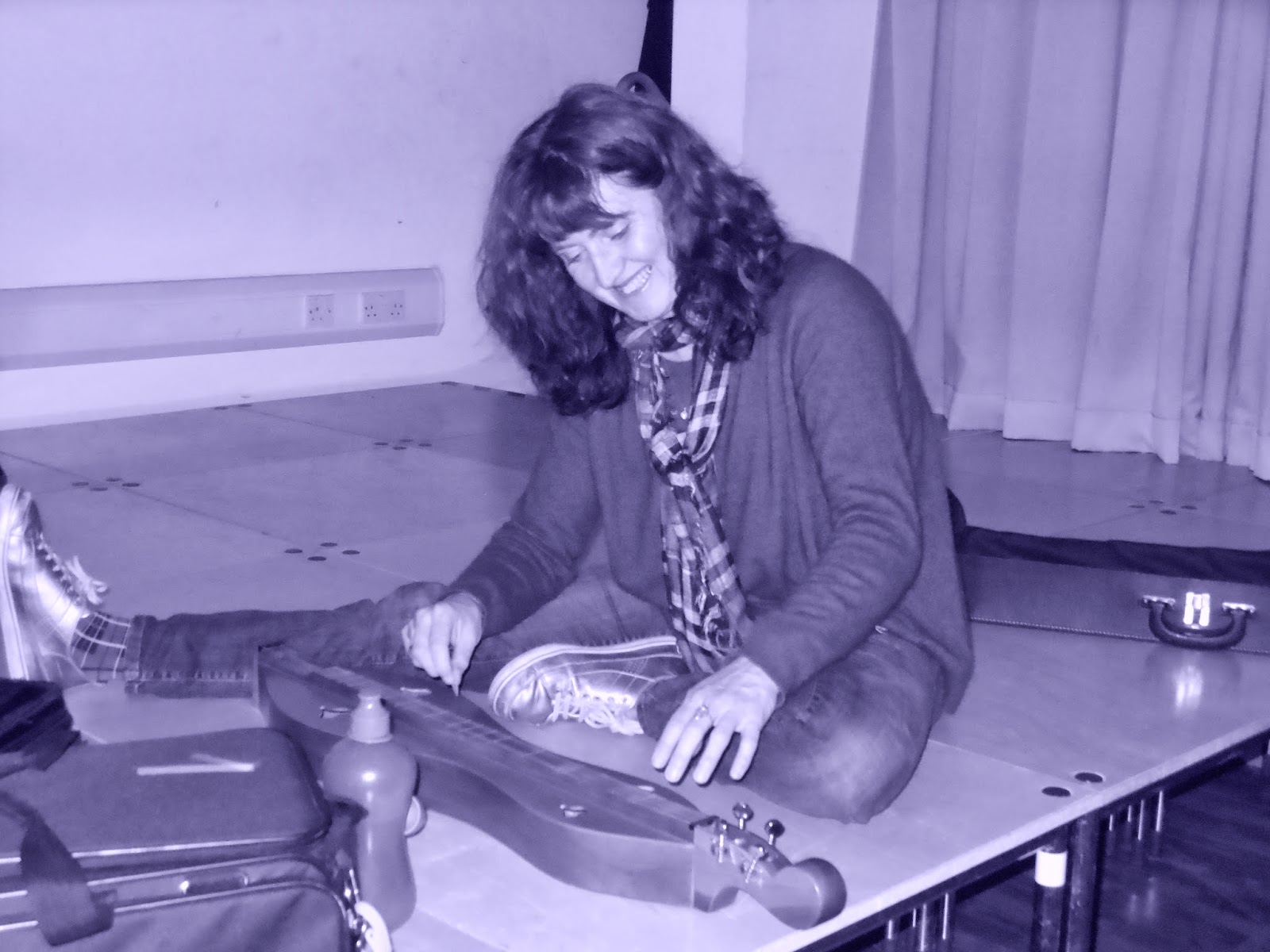 We went to bed happy, and woke up to a YUMMY breakfast of the best smoked salmon I'd ever tasted....if you're in Ford, head to Murrays for some smoked fish....AMAZING! With happy tummies, we carried on northwards to the Isle of Skye. I remember having to get a boat over as a kid, but of course there's a spectacular bridge now. By this time we were all finding our etiquette for requesting CDs in the car... (Can we change this now? / Who brought this? / Do you have anything cheerier? / What's this pish?) and Kenny suggested we needed some Rolling Stones to cross the bridge to. Good call Mr. L!

We had the evening off in Portree, so we headed out for some seafood on the shore... 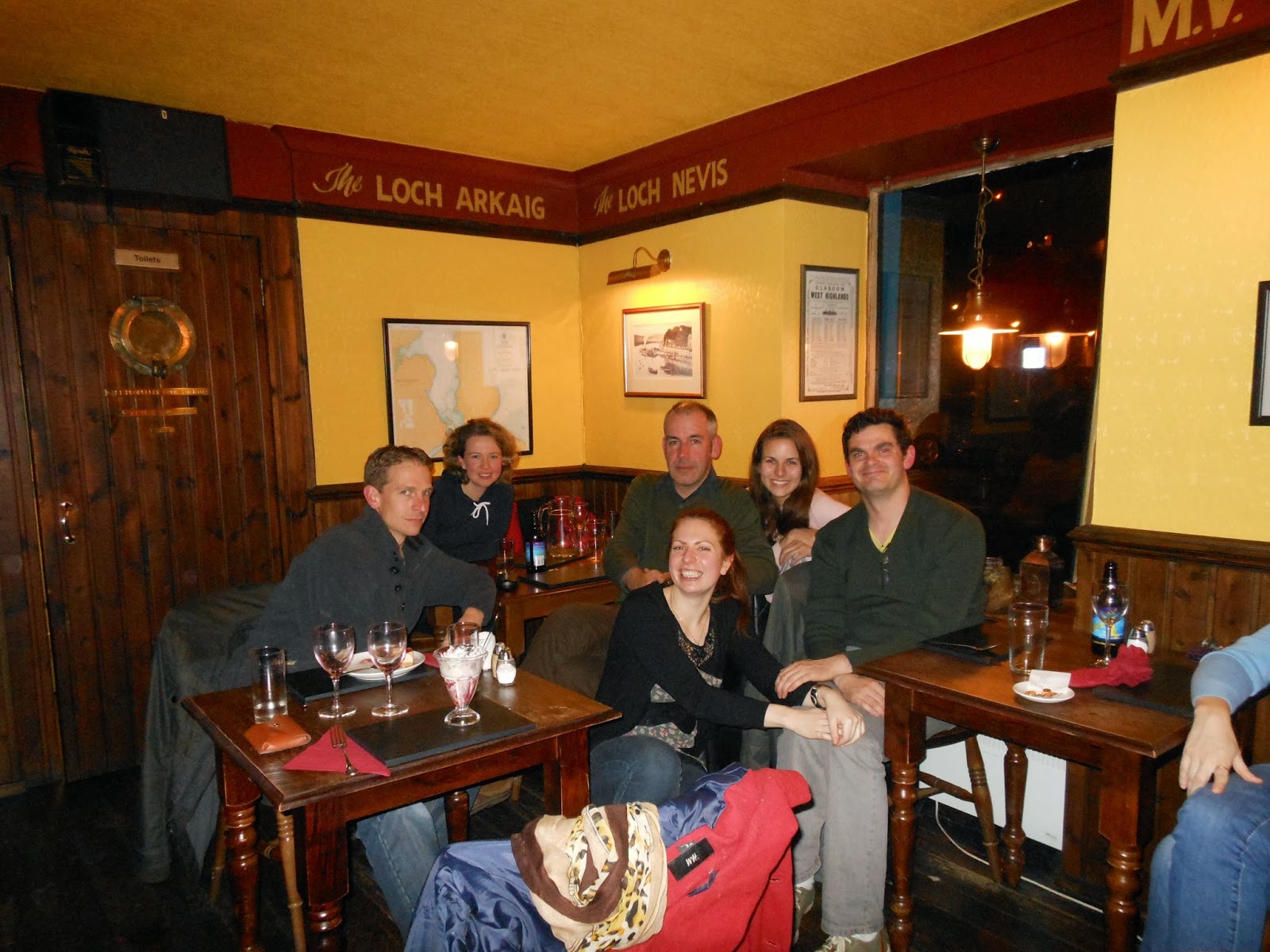 A few of us headed to a local pub afterwards, too, for a cheeky dram or two. But alas there's are nae pics of that ;-) I got back to the Portree Hotel and attempted to find my way around the hotel's industrial washing machines which the staff very kindly let me use....I didn't shrink anything! Even after the whisky!

On Tuesday morning, we all enjoyed wandering around Portree and then we gathered at the Aros Centre to load in ahead of our show! We were met by Dave, who gave us a warm welcome and helped Susan get all the lights set up. After unloading and taking advantage of some wifi, Aiyana, Kenny and I put our faces on ahead of doing interviews for BBC Alba's 'An La'. They also filmed some of the show, and the feature went out on Thursday the 19th. It made us quite famous on Berneray by the time we did our show there on the Friday! Anyway, back to Skye....a lovely audience; it was strange to be further from them, and not to be sitting in their laps (ahem) as we had been two nights prior, but it was a great show - what a great thing for Skye that theatre is. Kenny told me afterwards that the distinguished poet Meg Bateman had been in the audience. We were dead chuffed to hear that she enjoyed the show, and described the writing as 'bàrdail', which is Gaelic for 'poetic'. I wore a huge grin after that :-)

Time to sign off for today....tune in a-màireach for tales of infamous roads to Applecross, Tuairnear hospitality on Berneray, and a trip back in time in a Stornoway B&B......

Thank You for sponsoring the making of our set!

Having had a chance to draw breath after our incredible Scottish tour of 'The Idiot at the Wall', we'd like to issue a huge THANK YOU to two very important supporters of the show.

CAMIRA FABRICS very generously donated a MULTITUDE of beautiful felt, which the wonderfully gifted designer JAN BEE BROWN then cut into what became our seaweed. Those of you who have seen the show know how much seaweed there was...it was everywhere...escaping from jackets and chests and all sorts....so a big thank you for helping us to create that.

A big thank you also, to THE STEPHEN JOSEPH THEATRE in Scarborough, for your help with carpentry - it made such a huge difference for Jan Bee to have that sort of support, and we truly appreciate it.

Thank you, both, for supporting Jan and us in making the production something which was not only stunning to look at, but also tourable. It all worked so well. Images to follow!