This week, our Meet-the-Team series focuses on our wonderful producer, Aiyana D'Arcangelo. It just so happens to be Aiyana's birthday today, so we're glad to say she's galavanting around restaurants and things and not chained to her desk! A wee bit from our founder, Elspeth Turner, on working with Aiyana...

'Aiyana and I met at the Federation of Scottish Theatre Emporium of 2013. I immediately recognized somebody as hungry as myself, and I counted myself very fortunate when she joined forces with me to mount a first tour of The Idiot at the Wall. Boy, that was a challenge. We met in the February and we were mounting a tour for the September - 17 dates over 3 weeks. I was determined not to delay, but that wasn't much time to get it all up! We were so green, and unknown to people, that sometimes it involved just sitting with a huge map of Scotland, asking questions like 'Does anyone know anyone near Lochinver Village Hall, and can we get there from such and such a place in under 4 hours?!' Happily - we did, and we could. That tour was a huge success because we packed out theatres and village halls up and down the country, including some places which hadn't had professional theatre there in 20 odd years. We moved people with a story very much their own. On Berneray my Dad went around practically hustling people into a van headed for the hall - no one stayed home! We played one especially magical show for all 14 residents of the island of Canna. That tour was something special, and it was all down to Aiyana's guts and good sense, really.

It's a funny thing, trying to explain what a producer does. Pretty much everything that gets the show from your head / the page to a stage - they do. It's a lot, a lot, a lot of work! A good producer will find creative ways to reach audiences with the work - striving for a reach that matches your ambitions. A great producer will do all this with poise, tenacity, openness, and a big heart. All these things I am very lucky to have found in Aiyana, and I am so excited to see all of our work over the past year and half on SpectreTown come to fruition this August.'

So here's a bit more about Aiyana.... 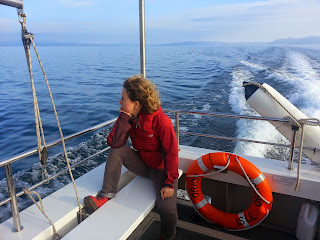 Aiyana is a freelance producer and project manager living in Fife and working in Glasgow and Edinburgh. Born and raised in southern Oregon, she has been slowly moving east over the years. After completing her undergraduate studies in Theatre at the University of Southern California in Los Angeles, Aiyana lived in New York for 6 years where she did production work for New York University (Tisch School of the Arts and Villa La Pietra), Robert Wilson (Watermill Center for the Arts), Lincoln Center Festival, ‘Inside the Actors Studio’ (Pace University), Cynthia Hopkins (‘Must Don't Whip 'Um’ - National Tour), and St. Ann's Warehouse. Since moving to Scotland in 2011, Aiyana has completed a post-graduate degree in Managing in the Creative Industries at the University of St Andrews and worked with the Dundee Rep, Derby Playhouse, Graeae, Edinburgh International Science Festival, Poorboy Theatre, David Leddy / Fire Exit, and Scottish Dance Theatre.
Posted by Stoirm Òg at 12:18 2 comments:

Who's Who in SpectreTown? Week 3!

On Monday we were immensely excited to take part in a design meeting for SPECTRETOWN, featuring our hugely talented designer, Richard Evans. Having been working all over the UK, Richard has now settled in Glasgow (yay lucky Scotland!) and we're thrilled to have the opportunity to collaborate with him on this project. Wonderful to look at some early design ideas.....which we'd better not give away on here!

Anyway, here's some more info about Richard's work. Come see us in August and be mesmerized by his craft, artistry and visual feasts! 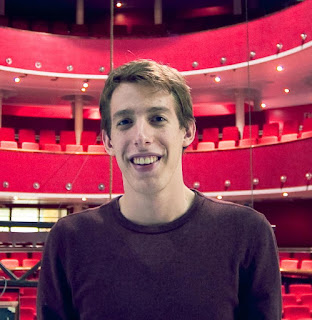 Richard trained at the Royal Scottish Academy of Music and Drama. Recently Richard's scenic design for Addams Family was shortlisted for the 2014 Broadway World Awards and his set design of The Merchant Of Venice was nominated for the 2013 Off West End Award. National Touring credits include: Avenue Q (2015 and 2016), Jekyll and Hyde (2015), Kidnapped (2014), A Midsummer Nights Dream (2013), The Man Who Had All The Luck (2012) and Lord of the Flies (2011 and 2012).

Look who's making our beautiful score for SPECTRETOWN...

We've been working with the lovely Matt Regan since summer 2014 - exploring bothy ballads with our own voices :-) Not only is he extremely gifted as a musician, writer, performer and teacher, but he's also possessed of a gorgeous, compassionate, creative soul. Come see SpectreTown and let him carry you through some trippy, luscious places with his music :-) 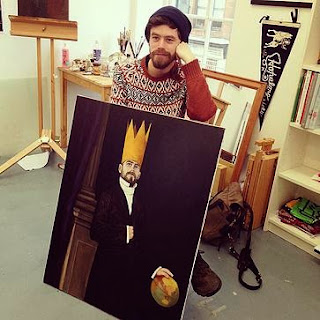 A wee bit more about Matt and his work...

Matt Regan is a freelance musician/writer living in Glasgow. He creates his own music, makes music for performances and teaches. He facilitates drumming, singing, and music workshops in communities, hospitals and prisons across Scotland. He was nominated for a CATs Award for his work for Theology, awarded young innovators funding for Swim Team and was part of Enormous Yes' Platform 18 Award at The Arches. His own work is under the name 'Little King' which involves spoken word, poetry, and song performed with a string quartet. More information found at www.reganmatt.com